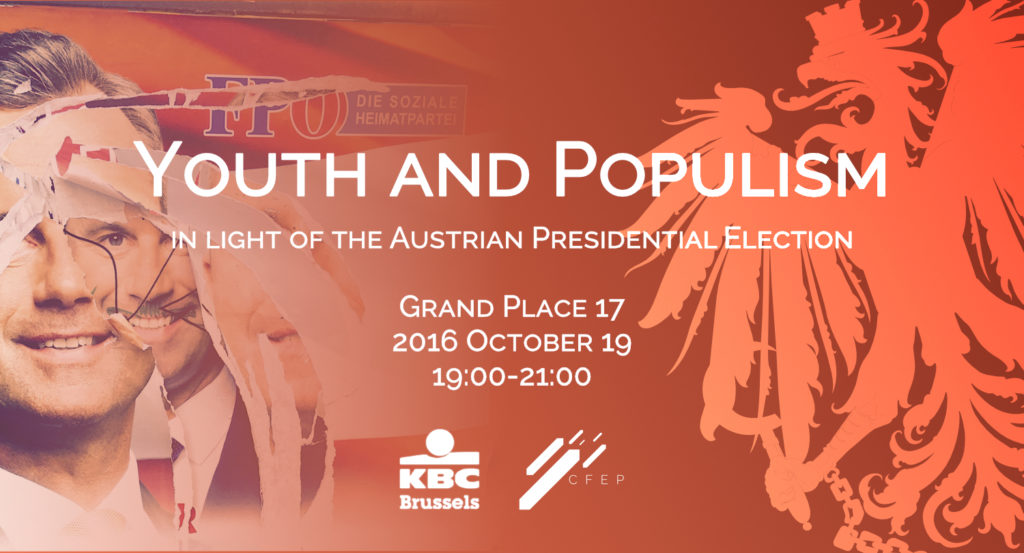 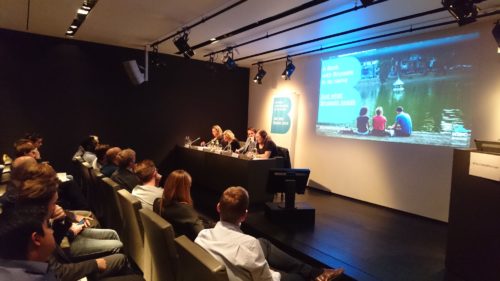 Eventually, MEP Othmar Karas (Head of Austrian delegation in European People’s Party) kicked-off the debate through a video intervention and shared his views on the topic. He spoke about four points – the rise of populism in Austria and beyond, the divide between populism and responsible politics, the misuse of direct democracy as well as the reason why we need the EU to overcome populism and implement politics based on responsibility and cooperation.

The situation in Austria is not unique to his country. “We witness a similar development in other European countries and in the world. Whether it is Viktor Orbán’s politics in Hungary, the rise of Marine Le Pen in France, Donald Trump running as a presidential candidate in the US, or the BREXIT in the UK – populism is on the rise everywhere. All of these considerations have led me to position myself publicly and clearly against any form of populism in domestic and European politics”, the MEP stated. He genuinely believes that the EU is the best way of cooperation amongst European states and the best answer to rising populism and looming nationalism. Falling back into nationalism is not going to solve any problems. Today’s challenges such as the refugee crisis, the European debt crisis or the unemployment crisis cannot be tackled by single states alone. FPÖ’s presidential candidate Norbert Hofer, however, omits this fact. Instead of choosing Europe as a solution, he portrays Europe as the problem. Yet, Europe is the only solution we have.

MEP Karas concluded his video intervention by saying “Dear friends and dear followers of the Centre for European Progression – I hope that this evening will serve you as a good occasion to discuss the challenges of populism that we face nowadays. Perhaps you might also have an idea on how to best deal with this problem. I wish you a fruitful discussion. All my best”. 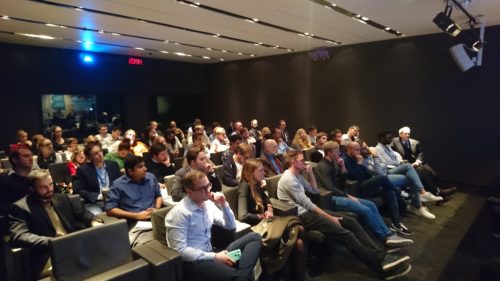 Juliane Schmidt focused on the definition of populism, the European situation, the crisis of representative democracy and the reasons young people vote for populists. Populism is an ideology that considers society to be ultimately separated into two homogenous and antagonistic groups: the “pure people” vs. the “corrupt elite” (cf. Cas Mudde). Populists see themselves as directly expressing the vox populi, the voice of the people. Populism is therefore not antidemocratic, but it is anti-pluralistic, illiberal and anti-elite.

At the moment, Europe is under threat from several crises, the eurozone crisis, the refugee crisis, social inequality, etc. and the failure to find solutions has made many people doubt the whole European project and system. Left-wing populists are embedding to their rhetoric economic and social aspects against globalization, capitalism and neoliberalism (Syriza in Greece and Podemos in Spain), while right-wing populists are raising xenophobic and nationalistic narratives. Both are exploiting a crisis of democracy and legitimacy. We see more and more of these parties getting elected across Europe (114 MEPs who have xenophobic and anti-migration views, 15,2% of the whole European Parliament).

There are 3 main ways in which populists influence policy: 1) they are the government (like in Hungary), 2) they are participating in or supporting the government (like Denmark and Italy) and 3) they are influencing policy just with their presence there, getting more support and spreading the rhetoric (France 2007). But why do people vote for populists? On a fundamental level, the rise of populism is the manifestation of the deeper-rooted discontent with traditional politics. They offer simplistic solutions and play on peoples’ fears, and succeed in politicizing issues of great importance to a large part of the electorate. There is a vicious circle, where populists are exploiting the crisis of representative democracy and the mainstream parties being unable to deal with this threat in an effective way. Young people are not the obvious populist voters because they are generally more idealistic, but the current economic and political situation in Europe drives many of them towards populist parties for several reasons. The youth is in general more cosmopolitan and believes in values like equality and universal rights, but they don’t see that reflected so far at the political level. Populists are the anti-elite club, the alternative, and they are more accessible to young people. They pretend that they care more about them, and often have more young people in high positions, younger leaders.

Mainstream parties have to find a way to reengage young people on issues that matter to them, instead of imitating or “outpopulising” the populists. They have to reconnect with citizens, take away the spaces that populists are occupying and use different language and different channels in order to offer and explain credible solutions, and also explain why we need the EU for these solutions. However, citizens themselves need to distinguish what populists say and what they do. Populism is a reminder that democracy keeps disappointing and that it needs updating in order to meet new requirements. Finally, Ms Schmidt stated that we need to change the crisis of representative governments in modern European democracies in order to fight populism from the start. 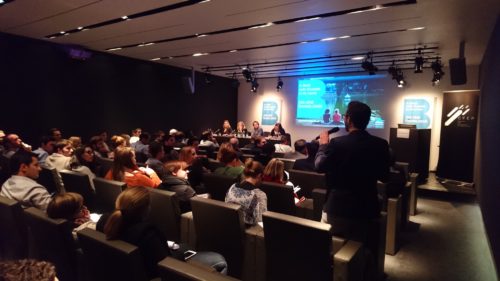 Ines Prainsack-Ward focused on the situation in Austria, and especially on the young voters’ behavior. She began her intervention by posing a question to the audience: “Do you think that the majority of young people are voting for populist parties?”. The answer was: no, young people do not vote primarily for populist parties. When looking at the referendum in the UK 75% of young people voted for remain. The same can be observed in Austria. When looking at the group of voters up to 29 years of age they voted in general for Alexander Van der Bellen (Greens), in Austria.  What can be observed though is that there was a gender difference in voting behaviour: For example 67% of young women (up to 29 years) voted for Alexander Van der Bellen, whereas 54% of young men voted for Norbert Hofer. Analysis show that  women tend to vote for more pragmatic and moderate politicians whereas young men are attracted to a “strong figure”.

She further outlined the reasons why people voted for Mr. Hofer: the was a clear urban – country side divide,  the level of  education, the question of insecurities; his voters had a more pessimistic view of the future, even though the level of unemployment in Austria is low; his voters also claimed that he understands them better and described him as a sympathetic leader (playing with the fears and hopes of people).

When focusing at the election behaviour of young men it can be observed that they are not looking for compromise, they are looking for a hero, a true leader. Young men want to balance their insecurities with such a “strong” personality. Hofer for example said “The stronger they fight me, the stronger I get” – which plays into the “we´ll show it to them” mentality.

It can be observed in Austria, that many people do not see FPÖ as a far-right party anymore – the “Nazi-sticker” does not stick. In contrary to ten to 15 years ago the FPÖ is not often being perceived as an established party. It is interesting to see that voters, even though populists get “de-masked” and their policies do not stand up to a test, continue to listen and vote for them time and time again.  Ms Prainsack-Ward argued that populists do not deal with facts but with emotions and feelings – they use the perception and present it as truth (a study in the UK for example asked people how high they think the part of the Muslim population is – the answer was 24%, based on perception, whereas the factual percentage was 5%). Populists also use very clear messages, simple words, and address strongly scapegoats and finger point to “enemies” (like bankers, elite in general). They also come across as being authentic (portraying themselves as true Austrians, defending our traditions) using symbols of religion, national emblems but also conspiracy theories (“they will try everything to prevent us”; the media is biased against us etc.). They also say “I am one of you, I understand you” – so they strongly involve emotions.

However, she explained what the centre parties were doing wrong in Austria: they became more populists themselves instead of clearer defining their views, outlining their vision. Established parties left a vacuum which was filled by the populists. Citizens are not interested in quarrels and fights but want to see results, but the contrary happened in Austria and can be observed elsewhere: populists , gain support thanks to the huge dissatisfaction of voters towards national and European politics.

There is no clear vision of the centre parties. Often they lack authenticity and politicians should stand firm and fight for their views and not throw their ideas overbroad. Ms Prainsack-Ward concluded her speech by urging mainstream politicians to present concrete ideas to the people and create real solutions for the problems of the people. 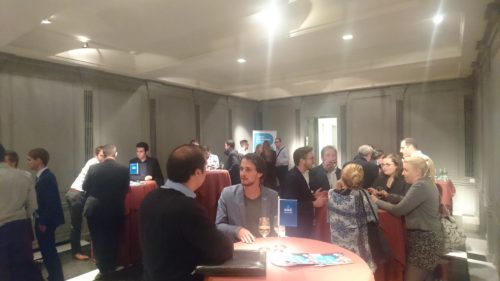 Elisabeth Ottawa (speaking in her personal capacity) placed her line of thinking on the issue of dissolution of the social contract as an explanation of the rise of populism, and on the ways to solve this problem. The social contract, providing social security, safety and a framework of opportunities (education, work and prosperity) in return for tax payments, we have seen and experienced so far is breaking away and is dissolving. Main drivers for this phenomenon are globalization (loss of jobs, oligopolies, economic pressure by emerging markets, relocation of industry), changing demographics (ageing society, failing pension systems) and digitalization (human work force replaced by IT, exclusion of certain parts of society without access to the digital world). She further added that due to digitalization there is no need for the established institutional framework that states used to provide. Traditional interest groups are replaced by social media and instant movements, allowing to reach an aim and speaking up without having to rely on established political parties. All these elements are contributing to people having low expectations on the future and  the feeling of having fewer chances than other generations had before.

In her view, more and more citizens are therefore feeling either unbound of this social contract or deeply disappointed and unsure about their safety and security (terrorist attacks) and about the prospects of prosperity, education and employment. She pointed out that the consequence of these feelings is that they make you to turn inwards, to your own “tribe” and that leads to protectionism and anti-immigration feelings. She concluded her intervention by stressing out the need of new parameters in the social contract at member state and also at the European level, because some of the problems and challenges we are facing are not purely national but cross-border ones. A new contract between the society and its citizens would be necessary, bridging gaps between “movers” and “stayers”, young and old as well as a strategy on fiscal, economic and educational terms. This would require honest politics which will give factual information and a new narrative to the people.

The final part of the debate, a Q&A session, also covered the following issues: whether the Austrian case is a special case, what is the exact definition of populism after all, the solutions to tackle dishonest politicians, the effects of populism on different countries in a global and European scale and the actions to be taken by the politicians.