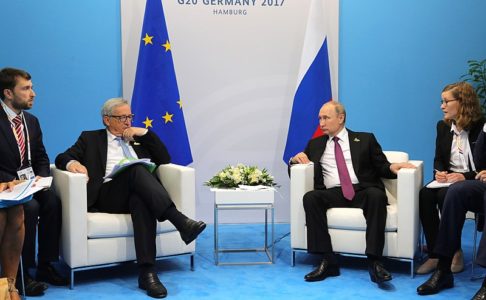 “[Russian] money laundering and mafia activity went on in Angela Merkel’s constituency for years, in the hope that Russian-owned dockyards would bring local employment.”

On the 19th of June, the Martens Centre and the Free Russia Foundation held a report launch on the Kremlin’s attack on the rule of law in the West. It is a timely publication, with the recent readmission of Russia to the Parliamentary Assembly of the Council of Europe (PACE), as well as the Dutch Public Prosecutor’s decision to begin judicial proceedings against named individuals over MH17.

It is difficult, if not impossible, to read Misrule of Law without feeling compelled to act. The report is structured in two sections: the Kremlin’s attack on the rule of law in the West, and Russian manipulation of Western policy. Reading the first section, it is psychologically easy to forget that this is non-fiction. Humans have a tendency to believe that everything will be fine right up until the point that it is not. Even then we convince ourselves things will return to normal. It is this phenomenon – normalcy bias – that contributes to plane crash survivors sitting in their seats while fire burns around them.

The human mind wants to believe that these detailed discussions of Kremlin interference are tales of intrigue featuring money-laundering and the mafia. They are, however, all too real. The Russian state has systematically manipulated Western institutions and systems in order to protect its interests. A dedicated Spanish prosecutor spent years investigating the Russian mafia. He produced nearly 500 pages of information on suspected criminal activity by Russian officials. He also faced serious personal risk, only for the Kremlin to protect crime lords from extradition and the National Criminal Court to acquit those who were tried for suspected mafia ties. The Court’s reasoning was that there was ‘insufficient proof’ of their investments in Spain being linked to organised crime. Money laundering and mafia activity went on in Angela Merkel’s constituency for years, in the hope that Russian-owned dockyards would bring local employment. In reality, the dockyards fell into avoidable bankruptcy due to money laundering – but not before local and federal German governments had obtained loans worth €240million to support the project.

The argument for Russia’s reinstatement to PACE is that the Council of Europe can constrain Russian behaviour. This is particularly hard to square with the Yukos case. Russia cooperated with an independent international arbitral tribunal and disavowed the whole process when it did not go their way. There is no reason to believe the Kremlin would treat civil society related judgments any differently. The former shareholders of Yukos (who were awarded billions of dollars in compensation for the company’s expropriation) attempted to attach Russian non-diplomatic assets abroad, which led to Russian threats against France and Belgium. Both countries reformed their national laws to, essentially, give Putin a veto over whether creditors could seize Russian property on their territories.

What makes the report so compelling is that these are not even its most concerning cases. Russian front organisation ‘think tanks’ participate in promoting the Kremlin’s narrative abroad. It is well-known that Russia Today and Sputnik are two of the chief producers of disinformation. Misrule of Law’s contribution is to warn its audience that Russian links to populist governments in Europe have reached incredibly worrying levels. Hungary, in particular, has seen its backsliding on democracy and the rule of law accompanied by extensive rapprochement with Russia. It appears to keep the EU/NATO line, but maintains strong bilateral relations with Russia. They jointly identified which GRU officer the Hungarians could expel to be seen to act after the Skripal attack. Italy and Austria retain stronger checks and balances that have prevented them from going that far down the same path, but the seriousness of compromised security and home affairs agencies in EU and/or NATO member states cannot be overstated.

To select a final, particularly worrying trend in relation to the Skripal case: “Whitehall observed a 4,000 percent uptick in pro-Russian propaganda since the abortive assassination, most of it coming from unmanned algorithms or ‘bots’, although other prominent peddlers of disinformation were all-too-real people who’d previously rushed to [the] Kremlin’s defense on Syrian chemical weapons use or MH17 or the hacking of the Democratic National Committee’s email servers.” [Misrule of Law, p100]. In other words, the extent of Russian manipulation of the Western debate is such that ordinary people are willing to spread the Kremlin’s narrative: even when it involves accusing the United Kingdom of carrying out the attack to stoke anti-Russian sentiment. Indeed, this echoes the Kremlin’s strategy in the Baltic states to attempt to generate a sense of grievance among ethnic Russians.

That is the key takeaway message from the report. The rights, freedoms and institutions the West holds dear are being used against it by the Kremlin. Not only that, but Western states repeatedly allow it to happen. To revisit the plane crash metaphor, the report’s authors are the flight crew shouting at frozen passengers to get up and act to save themselves. The PACE vote is an example of exactly what not to do. It is not impossible to counteract the Kremlin’s actions, but recognition of the issue is only the first step. It requires continual and repeated commitment to enforcing sanctions and the rule of law. Most importantly, it requires recognition that we can only protect and promote European values if we are willing to stand up for them even when it is politically and financially inconvenient.