Our debate starts with François Marien, who is Emmanuel Macron’s advisor on the inclusion of disabled people and founder of DisaGo Consulting.

Mr Marien starts his speech by stressing that he is a kind of exception among our guests, given that he is neither a researcher, nor a politician. Therefore, he feels he needs to tell more about his life and his way to join Team En Marche!

He was born as African, but later adopted as Belgian and European. Despite that he has been discriminated several times because of his disability, he has always considered it as an opportunity to do more in life. In 2010, he founded his own consulting company that works for the more effective inclusion of disabled people in the society.

Mr Marien accepted the be an advisor of En Marche! last year because he felt that this way he could contribute not only to the better inclusion and well-being of 12 million French, but to all the 80 million European people living with disabilities, given that Macron is an unabashedly pro-European candidate. Mr Marien has already concluded a proposal on the reform of Erasmus project that would give more opportunities for disabled students to study abroad.

He highlights the importance of being part of the European Union that provides protection against discrimination for citizens living with disabilities. He also stresses how Europe gives additional protection in this regard, especially abroad. Mr Marien also remarked how during the Belgian presidency of the European Council in 2010, all the member states signed together the “UN convention for disable people” thus further ensuring the protection of the millions of disabled people living in Europe today. He concluded his speech by reaffirming his trust in Emmanuel Macron’s policies and campaign but wanted to emphasize his commitments on the themes of discrimination and disabled people’s rights.

His speech is followed by Nicolas Baygert’s intervention, who is a professor at Sciences Po Paris, the Université Libre de Bruxelles (ULB) and at the Institute for Higher Social Communication Studies (IHECS), where he leads PROTAGORAS, a Think Tank dedicated to political and public communication. 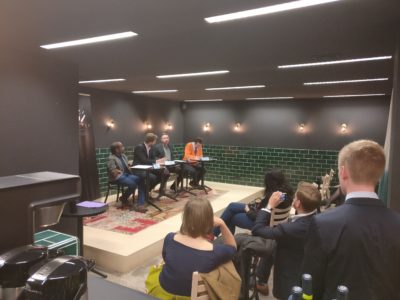 The political communication expert talks about the role that Europe and the EU played in the elections. For the first time, he notes, the majority of the candidates for the seat at the Élysée were Eurosceptic. Far from being homogeneous though, he points out all the different kinds of Euroscepticism seen during the campaign. Firstly, there is the illiberal worldview conveyed by Marine Le Pen and how, in her perspective, Europe currently stands for the liberal agenda, cosmopolitanism, multiculturalism and many other traditional fears of that electorate.

But Le Pen’s view isn’t the only one when it comes to criticism of the Union. Jean Luc Mélenchon, for example, strongly criticizes the EU liberal economic policies, running a much different kind of Euroscepticism. Mr Baygert describes Mélenchon view of Europe as EU-skeptic because, he argues, he is not against cooperation in the continent of Europe, just in the current embodiment of it, the EU. This kind of criticism could be found in part in the campaigns of Benoît Hamon and François Fillon as well.

Finally, he analyses the sovereignist agenda of Francois Asselineau and Nicolas Dupont-Aignan. The latter of which joined forces with the Front National leader in the second round in exchange for the possibility of being prime minister and who represent the classical sovereigntist position. In particular,Mr Baygert briefly focuses on Mélenchon’s view of Europe and points out how, historically, he was always more critical of the German domination within the EU, rather than Brussels directly. He didn’t offer any clear solutions but the objective was clear: to curb German influence in the EU.

All these different worldviews, he noticed, were colliding during these elections. T certainly constituted a transversal axis between all of them but, it greatly varies in terms of proposed solutions. Among them, Marine Le Pen has successfully de-demonized the front national’s image and she now offers voters an “anti-depressant”, a remedy for all the problems of France. Her solution is, of course, a reinvigorated nation state. Nonetheless, one can witness this as a trend happening all over Europe, where the EU became a scapegoat for all the fears and failures of the member states but, he concedes, this is a much bigger issue and one that merits its own focus.

Mr Reho highlights that for obvious reasons, the conservatives are not exactly joyful at the prospect of a Macron/Le Pen showdown the Martens Centre for European Studies is the official think tank of the EPP – editor’s note), Nevertheless, he understands the importance of evaluating a bad result as well as a good one and continues in his analysis, which he himself defines as “very franco-centric” and divided in three points.

First, he elaborates on the main question of the event: “Is it possible to win with pro-European agenda?“ His answer is positive, but he thinks that France doesn’t score as high on that list as other European countries right now, especially Germany. On the other hand, even with an estimated 60% of the population that is in favor of the European Union, France has a very unfavorable row of candidates in these regards. He argues that if we add the results of the first turn for Marine Le Pen and Nicolas Dupont-Aignan, we get to 26% of the total votes as opposed to Macron’s 24%. To this result one can add François Fillon’s votes, a candidate that Mr Reho considers on the right of his political family and arguably a Gaulliste (citing a campaign in the past where both Dupont-Aignan and Fillon campaigned against the Treaty of Maastricht). Finally, there are the votes of Jean Luc Mélenchon, which has a very direct nationalist message. The common point that Mr Reho noticed is that both the right and the left tries to paint itself as the true patriot, by comparing themselves and citing the republican past of the country and the ideas of the revolution.
The second point is about Macron’s chances to win. His answer is that Macron will win regardless of his EU stance and with a shorter margin than expected, depending on the television debate (that was scheduled for the 3rd of May, the day after this event – editor’s note). Furthermore, he believes that abstention will play a key role in the election. Most pollsters admitted that they underestimated the abstention during the Brexit referendum and Trump election. The same risk applies in France as well, because part of the right (not only the far right but the mainstream one too) hates Macron’s policies for his social liberalism and euro federalism, while the left under Mélenchon hates his economical liberal side. In the end, Mr Reho predicts that Macron will win on Sunday but he also thinks that the candidate from En Marche has been incredibly lucky to find the current political circumstances.

Firstly, the unprecedented move by Hollande not to run for a second term hence favored the possibility of a new personality running for his post. Secondly, the primaries privileged extreme candidates on both sides (Hamon and Fillon) and thirdly, of course the scandals of Fillon. He was supposed to run an imperdable campaign and became, instead, an ingagnable one.

Furthermore, there is a wind of populism that favors Macron. Not because he’s a populist, but because he is young and relatively inexperienced and this bodes well with populist demands. Lastly, he’s running against Le Pen and everyone is better than them in the mind of the French electorate. Even though, this stigma will be weaker than in 2002, it will no doubt play a role on election day.
Finally, the race is not over on Sunday, despite the fact that most people might be tempted to think the definite victory pro-EU side has won. Maybe even a desire to say that the “nasty Anglo-Saxons screwed up twice” while the continent has done better. But the speaker is more cautious and believes that even with this result, the French political system will have put the Front National in a more central position that it has had so far. The reason for this is that if Macron wins, the next problem for him will be to govern by majority.

Two scenarios are highly unlikely, but most reassuring in terms of political stability and two are likely but worrisome scenarios in terms of stability. First of these is the possibility of Macron getting his own majority, but this would be historic and unprecedented. The second unlikely one will be for the mainstream right to win a clear majority, and subsequently, we would have a normal cohabitation has we have known in the past.

There are two more likely scenarios as well according to Mr Reho: the first foresee no clear majority and, in such a situation, populist can benefit by shooting on everyone and profit from the chaos. The second likely scenario is that everyone joins the majority except the Front National. This may represent the beginning of a situation in which the FN will be the main opposition and attract other people from the mainstream right. He concludes with a final warning on this last possibility: things are moving, people who in previous elections were considered unlikely or even unthinkable to join forces with the Front National are now doing just that, like for example Dupont-Aignan or Marie-France Garaud, and therefore a de-diabolized Front National can act as a magnet for all the opposition to Emmanuel Macron.

The final part was dedicated to a Q&A session followed by a networking reception with complementary drinks.

We would also like to thank Alex Donnersbach, our moderator, for his amazing job in this debate!