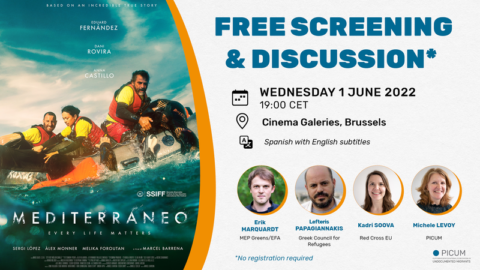 Platform for International Cooperation on Undocumented Migrants (PICUM) organized a screening of the film ‘Mediterraneo’ (2015) by Catalan Director Marcel Barrena — based on a true story —  on June 1st at the Galerie de La Reine in Brussels.

The film faithfully portrays the incredible story of two Spanish lifeguards: the protagonist Oscar (Eduard Fernández) and Gerard (Dani Rovira) who travel to the Greek island of Lesbos to help save the lives of many people. What motivated Oscar to go to Lesbos was a photograph from 2015 that made headlines and moved people around the world: the drowned body of a two-year-old Syrian boy, Alan Kurdin, on a Turkish beach. The two lifeguards are accompanied by Esther (Anna Castillo), Oscar’s daughter, who joined in defiance of the orders of her father who had forbade her to be there; as well as photojournalist Santi Palacios (Àlex Monner), whose work is initially despised by Oscar. While they are putting their lives at stake they are faced with a sad and cruel reality on Lesbos: thousands of people are risking their lives every day, fleeing hunger, misery and war in their countries of origin. Instead, they dare to face the Mediterranean Sea and the perilous journey — seeking sanctuary and a chance for a better life.

The experience on the island of Lesbos becomes even more difficult for the characters as they are faced with the indifference of the island’s authorities towards the  fleeing refugees in their waters. In fact, nobody is helping to rescue them; not even morality and ethics, nor the law of the sea, is worth a hand out of the water. According to Oscar himself there are 3000 people who take the risk and try to make the crossing daily. Among other personal dramas so faithfully portrayed in the film, the viewer is transported to the fateful and desperate moments that migrants experience in the water. “A picture is worth a thousand words”, and for that reason 2015 was a year that tragically remains in the memory of Europeans and the wider international community. At that time, everyone could watch the weekly reports and news articles of successive waves of shipwrecks and capsized boats in the waters of the Mediterranean. April, the most fateful month, when 1,500 people are believed to have died in the Mediterranean. The story that those Spanish citizens desperately seek to tell is not their own, but of those people who set out to sea in search of a dream once they have crossed all this immensity.

After the film was broadcast a discussion followed, attended by: Erik Marquardt, Member of the European Parliament for the Greens/EFA party; Lefteris Papagiannakis of the Greek Council of Refugees; Kadri Soova, of the Red Cross EU Office, and by Michel Levoy from the Platform for International Cooperation on Undocumented Migrants. Lefteris Papagiannakis, when commenting on the crisis portrayed in the film, drew a parallel between this refugee crisis in the Mediterranean and the current crisis experienced by the millions of Ukrainian citizens who have fled due to the Russian invasion of Ukraine. Kadri Soova speaks about the cases that still happen daily, in 2022, of migrants who are removed from the Mediterranean sea, and the tremendous importance of the work performed by the Red Cross — namely in terms of social support, health care, and other humanitarian effort. The summer months are especially problematic. The big question that emerged during the session and between the speakers’ interventions was: what can the European Union and its institutions do in order to counter this fateful reality? Coordination must be immediate, they agreed. Civil society – known to be hugely involved — must have a reconsidered role in the whole process. First, through the decriminalisation of rescue actions of citizens who risk so much to save the lives of those making these dangerous crossings in the Mediterranean. It is not an easy process, they acknowledged. What can we do? Prevent criminalising humanitarian assistance. They described bizarre cases of European citizens who are criminally accused of aiding refugees, processes that the European Commission has the responsibility to support.  During the session it has been mentioned that the European Commission conveys a public image of ignorance about what is going on, but in reality there are many known cases.

The European migration policy must be consistent with the European values ​​that we are so passionate about as Europeans. The violation of these people’s human rights must end. Another issue the speakers raised was that they believe many European elected officials who occupy leadership positions — whether at the European Parliament or otherwise — only care about the various other issues that win them votes. Therefore the European electorate must take a stand and vote clearly against the indifference of the EU institutions towards the crisis that we are witnessing. As one of the speakers put it, “saving people’s lives is not a crime.”

Following a question from the public about the contrast between people who seek to enter the European Union legally and those who do so illegally — and often in a desperate way — an attempt was made to explain what can be done in order to facilitate the process for those who do so illegally. Lefteris Papagiannakis highlighted the outrageous reality of the practice of the so-called “push-backs”, prevalent in several European countries. These — carried out for example in the Aegean Sea — happen when rubber boats full of migrants are pushed back to the shore they came from or even punctured. It is often noted that the migrants will be accompanied by small children, which they think will give them more leverage to gain access to the EU. This is a practice that must end at all costs. The reflection and exchange of ideas continued afterwards at the bar at the entrance of the cinema. It became evident that, in the long run, the EU and its institutions still have so much work to do. Especially, that is, if it wants to effectively champion the values that it preaches, and do so with those that need our help the most.