Last week, the Centre for European Progression headed to Porto for a seminar with the Tracing Integration Policies through Structured Dialogue (TRAIN) project team. The project aims to get young people and politicians together to talk about common European legal migration and integration policies. Based on these discussion events, the partners will come together to develop recommendations to the EU institutions. 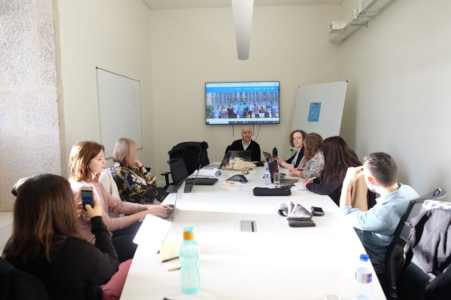 The project carries out local and international activities, and we will be organising the final activity in Brussels to present the recommendations. Young people can also participate in the project online, and that was the main topic of the Porto seminar. First, we discussed which topics to select for further dialogue both in person and on the forum. Splitting into groups of two, we then spent hours researching, discussing and writing recommendations on our chosen topics.

The CFEP worked on migration with the Law and Internet Foundation (Bulgaria), and used our institutional knowledge to come up with policy recommendations. For example, we participated in the European Council of Refugees and Exiles’ annual conference in October 2019. While there, we learned about examples of good practice on integration. As such, we could recommend that other countries copy Belgium’s DUO for a JOB, pairing over 50s with young jobseekers of a migrant background. 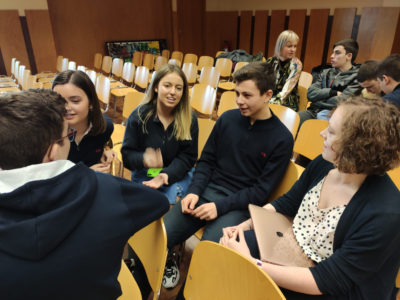 In order to launch our new forum, we visited the Colégio Internato Claret with the help of our partners at Geoclube. There, we presented the project to the students and sat down with them to discuss their ideas. They were an articulate, socially aware group of young people who were full of ideas. The group the CFEP worked with had a particular passion for helping the homeless, having volunteered to distribute food to them. We spoke about how, in the UK, Indian restaurants often open on Christmas to give free dinners and company to people with nowhere else to go. We also decided that food was a way for people to get to know each other’s cultures. In Britain, Meghan Markle worked with the Hubb Community Kitchen – run by and for Grenfell Tower survivors – to produce a cookbook together with women from 12 different countries. Here in Belgium, there is also a Syrian refugees’ catering group in Antwerp. 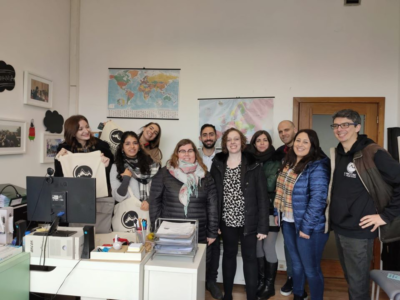 The groups then posted their ideas on the forum, and we would invite all our followers to do the same! All you need is an email address: there’s no need to make yet another new online account. On the last day of the seminar, we exchanged project experiences with each other, finalised our policy recommendations, and then tackled the francesinha, a local sandwich filled with meat, covered in cheese and a beer sauce. It does come in a vegetarian version, but even then it’s a real challenge to finish! 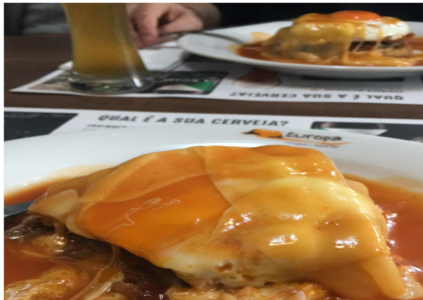 All in all, we had a good, productive time in Porto and are looking forward to the next seminar in Malta!

The Centre For European Progression goes to Bucharest 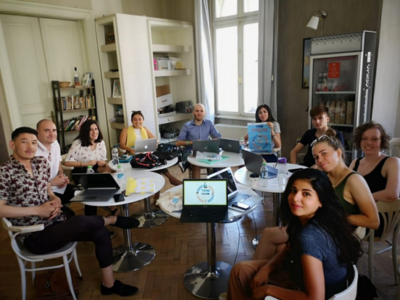 We recently had the chance to go to Bucharest, where we met up with our partners from across Europe. NGOs from Italy, Bulgaria, Malta, Romania, Finland, Austria, Portugal and Estonia, as well as CFEP from Belgium, are all represented in the TRAIN – Tracing Integration Policies Through Structured Dialogue project.

This project comes under Key Action 3 of the Erasmus+ Programme, and seeks to use the Structured Dialogue method to develop recommendations on migrant integration policies following input from young people.

To cut through the Euro-jargon, what this means in practice is that there are three Key Actions in the Erasmus+ scheme and all funded projects have to come under one of those umbrellas. Our project falls under number 3 – Support for Policy Reform – as it seeks to gather young people’s views on how to reform integration policy.

This is where the Structured Dialogue comes in. The European Commission wants to work with civil society organisations to hear from young people themselves. The Structured Dialogue takes place in cycles of three Council presidencies, lasting 18 months. The current cycle involves the Romanian, Finnish and Croatian presidencies and has a particular theme – ‘Creating opportunities for youth’. Each EU country carries out a national consultation of young people and youth organisations during the 18-month period.  The participating organisations’ role is to provide a more direct link between youth and European policy making, by holding discussions with young people in their respective communities in order to hear their views and experiences surrounding migration and integration.

The closing event will be held in Brussels in June 2020, organised by the CFEP. This is when the results of the dialogues will be submitted to the European Commission, in the form of concrete policy recommendations.
Over the last few days, CFEP and our partners met to discuss the Structured Dialogue, the project actions and best practices on integration from our countries. It was particularly interesting to hear about our partners’ experiences. For example, our Finnish partners have a number of members with a refugee background, and our Estonian partners have a dance company as part of their NGO and are working on connecting Estonian and Russian speaking communities. In Austria, our partners have discovered that young people need time and explanations in order to confidently take part in policy discussions. Finally, in Malta, our partners have experienced a disparity in treatment of migrants based on their wealth and their country of origin. Equally, they found it interesting that in Belgium, integration courses are mandatory for most non-EU newcomers. 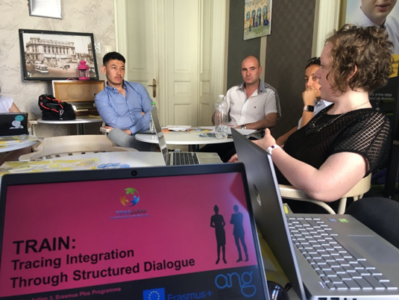 Our next steps as a group are to discover more about how these different policies work on the ground, and to develop recommendations for Europe as a whole based on the views and experiences of young people.

If you or your organisation wish to participate in this project, please contact hannah.bettsworth@c4ep.eu.

Report – PLUS Project under the framework of Erasmus+ KA3

PLUS project is a consortium of 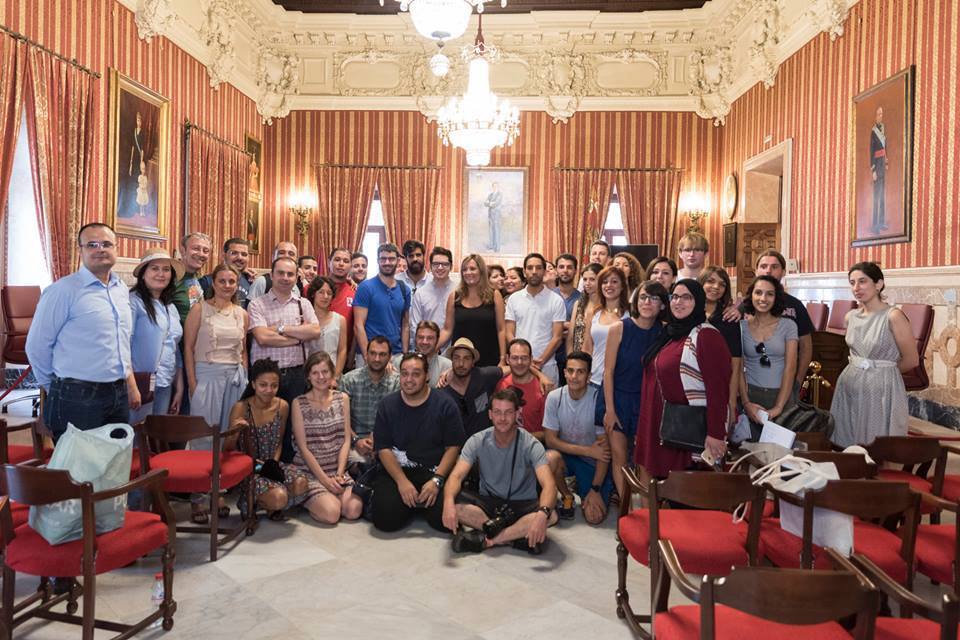 European countries and southern Mediterranean neighbours (Euro-Mediterranean partners) – Belgium, Egypt, France, Israel, Italy, Morocco, Portugal, Tunisia and Turkey – represented by youth associations and NGOs that work directly with young people. PLUS project is an initiative led in Spain by the Three Cultures of the Mediterranean Foundation and pertains to Key Action 3 of the Erasmus+ programme. That action focuses on dialogue between young people and policymakers, the aim being to have young people’s voices and opinions heard when political decisions are made. We are very pleased and honoured to have been given the opportunity to participate in the PLUS (Politicians Listening to Us) project.

The group of PLUS project participants comprises 50 young people from 20 to 30 years old with diverse educational backgrounds. They are clearly committed to dialogue with policy‐makers at various levels, thus showing their willingness to engage is paralleled by greater involvement with a view to creating a better world, raising social and environmental awareness and promoting solidarity, thereby fostering social entrepreneurship to counter unemployment and job insecurity. The social economy has proven to be the formula resulting to be the best solution in employment terms during the crisis years throughout Europe and occupies a priority place on the future agenda of European institutions. 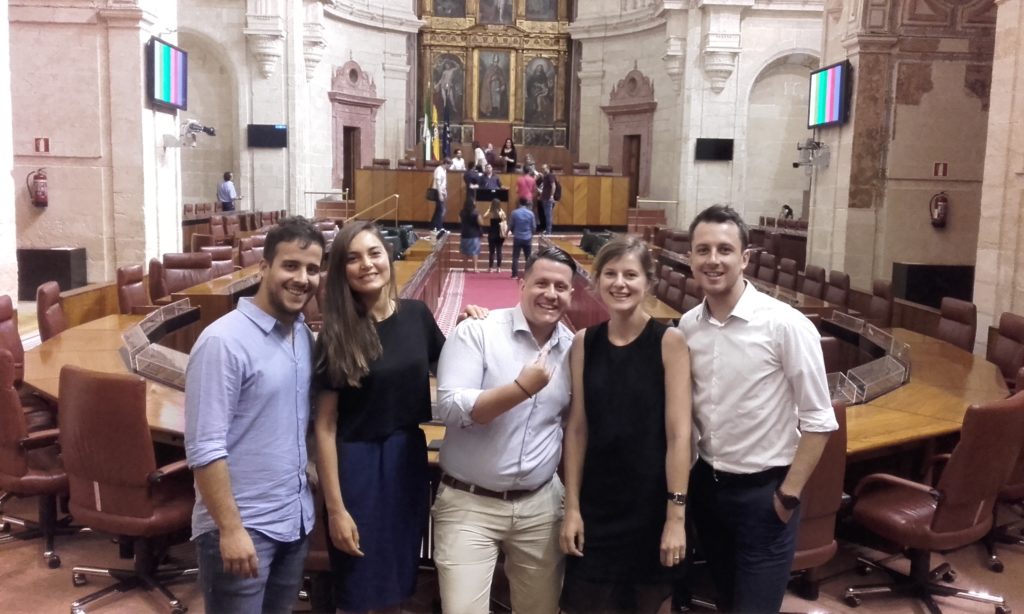 CFEP at an initial stage, conducted research on the Belgian policies that encourage the social economy as a driving force for long-term sustainable development (at local, regional and federal level) and as a result, after many consultations and contacts with several key stakeholders and politicians at a local, national and EU level, a document was composed about existing subsidies, support offices, seminars, meetings on good practices and other activities regarding the social economy in Belgium. An analysis of the steps and policies taken by European governments and neighbouring Mediterranean countries will serve to create a series of recommendations helping to achieve growth of the social economy as a potential alternative.

The participation in the PLUS project was a great, educative and constructive experience of exchanging best practices, highlighting examples of successful social enterprise initiatives in each country, and working in a multicultural, multilingual and multiethnic environment, contributing to the development of mutual understanding, trust and tolerance within different groups of people.  This international meeting served to pool information on social enterprise gathered beforehand in order to produce a document of recommendations which it will be presented at major gatherings such as European Youth Week and other forums of interest. Among the benefits is enhanced awareness of the notion of social enterprise as a real and possible alternative for young people.

That work was accompanied by visits to major local and regional political landmarks such as the Andalusian Parliament and the City Hall of Seville, the capital of Spain’s largest autonomous community, providing an opportunity to meet, discuss and react with key decision‐makers. We visited the Parliament of Andalusia and we had a very interesting discussion with its President, Mr Juan Pablo Durán. 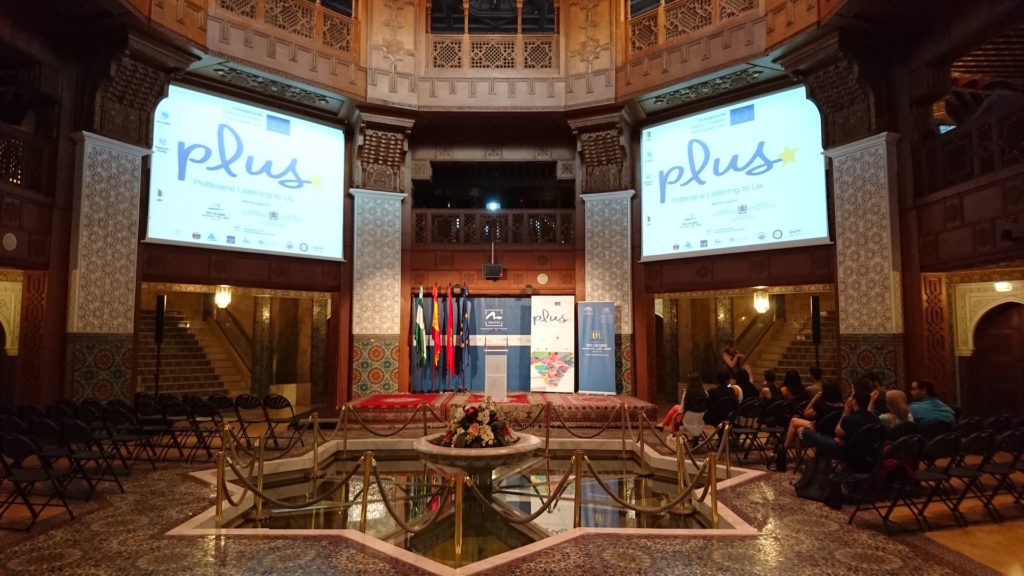 Then we moved to the Regional Government of Andalusia based in the Palace of San Telmo for an informal discussion with the President of the Government, Mrs Susana Diaz. Mr José Roales, General Director of Social Economy in the Ministry of Economy of the Andalusian Regional Government, shared data and impressions with us on social economy in Andalusia. Additionally, we visited Seville’s Ayuntamiento (Town hall) where Mrs Alicia Morillo, responsible of Youth, Gender Equality and Relationships with the University, provided us with in-depth details about Seville and its management. After that, Mr José Antonio Rodriguez Salas, Mayor of Jun (the Spanish town that runs on twitter) came from Granada to discuss with us, at the Three Cultures of the Mediterranean Foundation Headquarters, the Moroccan pavilion, about “horizontal democracy” and communication by using technology and social media (twitter in particular) in small villages.