On the NATO Summit 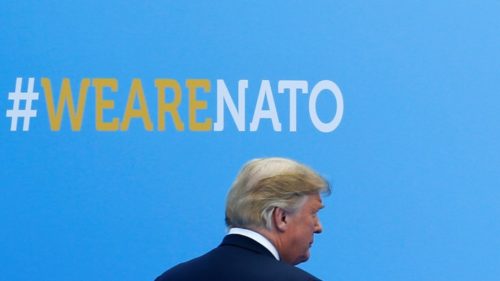 What to say after an intense week of politics and football? While the English team failed to achieve their 52-year old dream of winning the World Cup, some dreamers of other sorts took the stages to discuss international politics and security. The arrival of US President Donald Trump, a highly controversial figure per se, guaranteed that things on the annual summit of NATO allies will be very interesting. President Trump announced that he will be demanding that every NATO member starts spending 2 % of their GDP on defence, whether they like it or not, and that the other allies owe money to the US for many years of spending on their protection.

As everyone would have probably expected, things in the NATO discussions did not go very smoothly from the start. European Council President Donald Tusk made it clear on the favourite social media tool of US President, that the EU is a reliable partner, which is spending on defence much more than Russia and as much as China. In his press statement, Tusk went even further by elaborating that US President Trump is not appreciating his allies. It was a clear fight to set to tone and the agenda of the NATO summit, and it was first class media material. 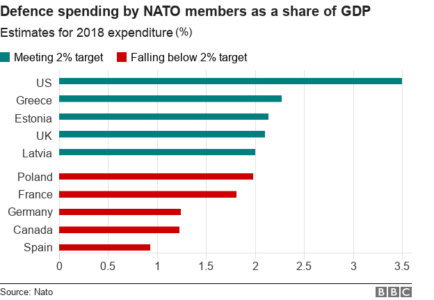 It is known so far that most of the NATO members are still not very close to the 2 percent GDP defence expenditures, but obviously it is not the same case with a small member state and an economic giant. Speaking of economic giants, Germany was on the frontline of attacks by President Trump, who said that basically Germany is controlled by Russia. Trump was referring to the Nord Stream 2 pipeline deal between Germany and Russia, which is also not seen favourably among some circles in the EU as well.

Germany depends on Russian gas and the Nord Stream 2 would increase the Russian influence in Europe. President Trump did not rant against Germany as a country, but as a symbol of the European Union as a certain set of norms and political values, which is why he has a visible distaste for German Chancellor Angela Merkel. The German Government is not used to this type of behaviour, so it is still looking for ways how to address this issue.

In the end, Trump’s press conferences and conversations with journalists are truly becoming something one would like to see live. With the star of the show calling the shots, NATO’s decision to invite FYROM/North Macedonia to become a NATO member ended up being quite marginalised. When pressed with journalist questions, President Trump seems to communicate one thing, and then on Twitter he states something completely different.

Dedication of the NATO members to start spending 2 percent of GDP on defence by 2024 leaves a certain satisfaction to President Trump, who is already announcing that the long-term goal should be 4 percent. The Guardian already called the summit “two days of mayhem”, and it remains to be seen will this “mayhem” be continued on. However, there is a very long period before 2024, and by then, someone else could be sitting in The White House. At least that is what many would have liked.

Combating disinformation and upholding freedom of speech in France 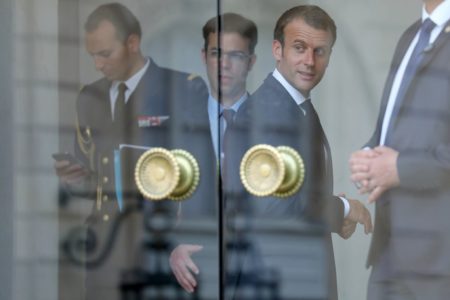 Nowadays as I scroll through my Facebook newsfeed on the tram to work, I can almost always expect to come across the most ridiculous (yet attention-grabbing) headlines, from “Outbreak of Nuclear War” to “Russian hackers used Tumblr to spread ‘fake news’ during US elections.” Even the comment section on the Facebook posts are an entertainment in themselves with the amount of ludicrous ideas people share on these platforms. Sometimes I’m tempted to waste that 30-minute ride reading through these comments out of curiosity of what people have to say these days. Other times, I know better than to do something that will trigger the desire to debate with them. The reality is that, 99% of the time, that debate will go absolutely nowhere, regardless of how wrong they are. Some people use the internet to exchange ideas with others in an attempt to enhance their knowledge. Other people use the internet close-mindedly, hoping to impose their ideas on whoever is willing to agree with them.

The growing use of technology for sharing and finding information by citizens has given it an important role as a forum for political debate. The internet has granted us the ability to quickly spread ideas with a mass population and it is reshaping the way in which citizens choose to participate in democratic societies. However, while the internet, and specifically social media, have allowed the various voices in society to be heard, it has also resulted in the spreading of disinformation. This is especially true during election campaigning season as persuading the public to believe one opinion over another is ever more crucial.

The fabrication of disinformation aimed at democratic society and the electoral system increased during the United States’ 2016 presidential election, when foreign actors created fake social media accounts to sway public opinion, and France’s 2017 presidential election, when rumors were fabricated about Macron possessing offshore bank accounts. As a result, President Emmanuel Macron has embarked upon legislation that will combat the spread of “fake news” during elections by issuing license suspensions for foreign-sponsored media outlets, requiring the disclosure of sponsors’ identities, and restricting the amount of money these sponsors can fund. Additionally, the new law would allow an individual to more easily refer cases to a judge.

While it is important for the public to have access to accurate information, it is also well known that, in the past, governments have used censorship to silence media outlets and journalists who took oppositional stances on officials. I’m sure we all remember Trump’s accusations of fake news by media companies, such as CNN, every time he was criticized. But citizens have a right to criticize their government and the ambiguity in how national legislation defines “fake news” poses a potential threat to freedom of speech and the freedom of the media. Therefore, Macron will unlikely be able to implement this sort of legislation without a little resistance.

In order to prosecute someone for spreading disinformation, it must be proven that the producer knowingly developed and shared inaccurate information with a malevolent intent. But allowing the government to decide whether someone is exercising their freedom of speech or attempting to disturb public peace is a tricky task and can be easily abused.  Even if a government can sufficiently draw the line between fake news and freedom of speech, the reality is that there is only so much the government can do to control the information a person is exposed to. Many producers of fake news are technologically clever and can find cracks in the system to avoid punishment for disinformation, such as publishing under anonymous accounts since the government cannot prosecute an individual whose identity is unknown.

Therefore, disinformation cannot be resolved with simply a legal solution, but rather requires an inclusive effort between governments, corporations, and citizens. Combining the efforts of these three major players can ensure diligence and enhance transparency. Majority of social media platforms hire staff who are tasked with reviewing content deemed inappropriate. These teams hold a responsibility to the public, similar to that of the government, for ensuring a safe online environment by filtering disinformation from plausible information. Their participation can also generate more accountability in censorship efforts because third-parties are assumed to be impartial to the government.

Although, we should not be so naïve to the fact that in some cases these third-parties may fail to fulfill this role, as recently seen with Facebook. Thus, we, the citizens, have the most significant role—while it is our right to express freely how we feel, it is also our duty to ensure we use these outlets in a way that is respectful of other’s opinions, as well as in the confines of law. Most importantly, we have a responsibility to ourselves to filter out plausible information from disinformation for the sake of our intellectual growth, which requires access to accurate information.

The European Commission’s Code of Practice to combat disinformation emphasizes media literacy, which can teach Europeans to assess information more critically and identify disinformation or unreliable news outlets. It seems media literacy is generally high among most internet-users, as a Reuters study found that people in France spent 10 million minutes per month on fake news websites, whereas 178 million minutes were spent on Le Monde—a more reliable news outlet. While the interactions with fake news and credible news on social media are less clear-cut, it is evident that people spend more time on the latter than the former.

Disinformation is definitely something to be wary of in a world where anyone can post anything their imagination can construct. However, President Trump’s excessive use of the term “fake news” has assumed a greater threat than is really there. Despite the increase of disinformation online, a majority of people still seem to be resorting to trustworthy sources. This means disinformation’s reach is less widespread than the government perceives and new legislation may be unnecessary. But that does not mean that we should scrap the effort as a whole. Some people remain vulnerable to disinformation, so media literacy should be an ongoing effort, rather than an area of concern primarily during election season. If France were to pursue more long-lasting efforts such as increased media literacy, rather than resorting to censorship laws, it could avoid walking the fine line of defining freedom of speech and disinformation.