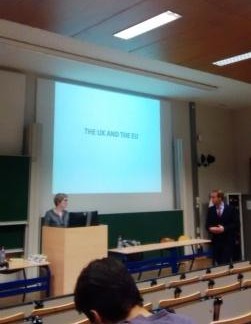 The relationship between the United Kingdom and European Union has always been a complex one. Prime Minister David Cameron’s recent proposals for EU reform and his promise to hold a referendum on the UK’s continued membership of the Union raise many questions, such as whether this requires changing the European treaties. The Institute for European Studies at the Vrije Universiteit Brussel was therefore pleased to welcome British Ambassador to Belgium Alison Rose for a public lecture about these issues on Wednesday 16 December 2015.

The Conservatives’ election manifesto promised to hold a referendum on whether or not the UK should stay in or leave the European Union. When David Cameron announced in January 2013 his pledge to hold a referendum, a key element was that he would seek to make changes to the way the European Union works. Only once this renegotiation of British membership had been completed would he put the new arrangement to the public vote.

During her presentation, Ambassador Rose gave an overview of what the UK brings to the EU, the reforms needed and the UK’s point on further integration. On the aspect of what the UK brings in the EU, she mentioned that UK is one of the major foreign powers in the EU and pointed out the crucial role the UK plays in the areas of: active leadership (climate change policy, foreign policy, counter-terrorism policy), long commitment to competitiveness and growth (champion of single market and free trade agreements), active participation (participation in defence missions, vision for EU action) and sound economic fundamentals (71,4% employment rate).

Ambassador continued her contribution by explaining why the UK needs more reform before the referendum by covering the areas of economic governance, competitiveness, sovereignty and immigration. More precisely, she approached the issue that UK is not in the eurozone and stressed out the need of a permanent settlement for ins and outs, a safeguard mechanism for achieving a balance between ins and outs. Furthermore, Ms Rose said that competitiveness should be put in the DNA of whole EU, while deepening the single market. “Without single market we will not be able to afford social models” added the ambassador. Concerning the reforms on sovereignty, she supported the view of ‘red card’ for groups of national parliament in order to block EU legislation, and asked EU’s commitment to subsidiarity to be fully implemented. An “Ever Closer Union” is not a destination for all according to the Ambassador. Moreover, she elaborated on the criticism the UK receives about its daunting demand for immigration reform and stated that UK is an open economy, with no contributory system though. For that reason she added the UK asks for longer transitional periods for new MS, and a restricting access to in-work and out-of-work benefits to EU migrants. EU migrants must live in UK and contribute for 4 years before receive in-work benefits or social housing, with no rights of exporting child benefits. She made clear that UK will eliminate the tricky ‘’backdoors’’ of immigration. 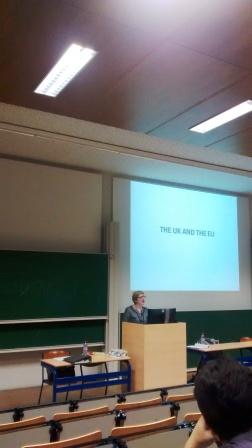 Nevertheless, Ambassador Rose agreed that EU has provided benefits to UK too, like single market, enlargement, but the EU is changing and the British people are not happy with the status quo (about 40% of the British public). Consequently, they voted for UK to leave, and supported the government for ‘’reform, renegotiation and referendum’’, by giving democratic legitimacy (four million votes) to Cameron to impose these reforms and pledge to hold a referendum. It is a matter of trust now for Cameron once the renegotiation of UK membership has been completed to put the arrangement to the public vote.

The Ambassador enriched by flexible pragmatism mentioned that UK has no Plan B and expressed her firm support for UK staying in the EU on a reformed basis. We have to convince people that we have fixed the problems we promised and make clear that the reforms they have in mind will benefit EU and not just UK, through the improvement of EU’s effectiveness, making it more dynamic and transparent and delivering prosperity and security for every country. The great prize at the end of the process will be the setting of the UK’s membership in the EU.

Finally, she underlined the next steps of the renegotiation process namely the discussions with each Member State, the substantive political discussion which will take place today at the EU Summit, the concrete proposal to be adopted by in February and the referendum to be held by end 2017 and emphasized the importance of a fruitful engagement with the young generation for an Ambassador.