Beginning of the end?

Beginning of the end?

Many look forward to Merkel’s fall 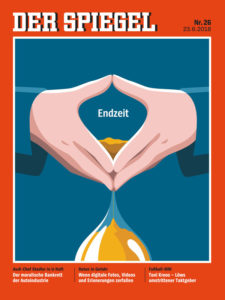 Despite all the black clouds above the Council’s colourful egg building, German Chancellor Angela Merkel might survive this weekend. She might even last for the upcoming weeks and months. But the era of responsible politics is about to end soon.

I simply don’t want to hide my admiration towards Chancellor Merkel. Even though, I clearly see her flaws of doing too little and too late, playing the two-level games in Brussels and back in Berlin and suffocating every potential successor around her. It would be endlessly idealistic to portray her as an altruistic saviour of Germany and the EU. This is politics, after all.

Still, I am convinced that she is the last Mohican of the post-WWII era when politicians were more or less aware of the fact that it can have devastating consequences if they say or do whatever comes to their mind. It matters to get and stay in power, but it is even more important to maintain a good relationship with their counterparts.

It was Hungarian prime minister Viktor Orbán who first challenged seriously the long decades old rules of the game and Merkel’s patience. But by now, she might look with nostalgia to those good old days back in 2011 when she only had to deal with one black sheep in the flock of international politics. The iconic photo from the recent G7 summit shows very well how tired she became lecturing and persuading all of those idiots with whom she is obliged to cooperate. But she has persisted so far. It is a great question though how long she will be able to continue.

This is why the attack from the CDU’s sister party CSU seems very unfair. It will be Merkel paying the bill for the Bavarian conservatives, who manoeuvred themselves into a rhetorical trap in order to prevent their voters from drifting away and supporting the AfD. No one should be naïve, the CSU had no other choice but to act before the fall elections. Telling against a certain group of people who are distinctively different from us has always been the best recipe to gain popularity, as we have learnt very well before WWII.

If the coalition crisis over migration in Germany turns out to be as catastrophic, as it seems now, the legendary cooperation between the CDU and the CSU will end for good. The Greens my join the coalition, but the whole situation seems so unstable by now that the SPD has already started to prepare for a snap election in the autumn, according to the rumours.

But the question remains the same: who will be able to replace Merkel? Here I don’t only perceive it as a simple question of political succession in the CDU. It is about her entire role in European and world politics. Because even if US President Donald Trump thinks it is a good joke to give her some candies from Starbuck instead of reasonable compromises on trade deals, due to her credibility and experience she is the only one who has some leverage on that mean idiot. It is the same for Viktor Orbán, Alexis Tzipras, Theresa May, Emmanuel Macron and so on.

Nevertheless, I find it strange that we only talk about all the conspiracies and moves to make her fall. But no political speculator asks the question if she actually wants to stay. Because I can clearly imagine that the point might arrive when it will be her says it is time to say f… off and move on. I can definitely see her chilling in a tüchtig garden somewhere in East Germany, with a nice glass of beer and some garden gnomes around. They will be much nicer company than her international counterparts. The only question is what would happen to us if she also comes to this decision.