Scotland’s Story: here’s what you missed at our panel discussion

The CFEP held a well-attended panel discussion on the Wednesday 6th November at the Press Club Brussels on the topic of Scotland and independence: out of the frying pan and into the fire? If you weren’t able to attend, here’s a brief summary of what you missed. 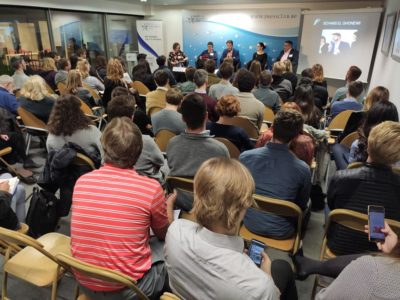 Sheila Ritchie MEP began the event with a passionate defence of Scotland remaining in the UK. She cited her party’s preamble, stating that “Our responsibility for justice and liberty cannot be confined by national boundaries.” The Liberal Democrats oppose another independence referendum and support a referendum on Brexit. This is often challenged for inconsistency, but for Mrs Ritchie, it is about ending existing chaos and preventing additional chaos. She explained that the difficulties of undoing a 46-year old partnership between the UK and the EU would only be amplified in undoing a 416-year-old partnership between Scotland and England. For people new to Scottish politics, Mrs Ritchie provided an insight into what it was like to campaign against independence in 2014. She described it as the worst experience of her political life and the beginning of post-truth politics. Economics does matter, and she noted that Scotland’s deficit is above the 3% target required for EU members under the Stability and Growth Pact. People, however, matter the most: Mrs Ritchie highlighted that a lot of Scots are married to people from other parts of the UK, and raised concerns about building divides between those communities. Her party wants a “reformed, federal, and fair union”. She conceded there would be little chance of this under a Boris Johnson government, but noted that this was another reason why they were fighting to stop him in the December 12 General Election.

Christian Allard MEP naturally disagreed with Sheila, but the two MEPs had a good-natured debate. For Mr Allard, his identity as a French Scot demonstrates the openness of the independence movement for people from everywhere. It was important to him that people’s ideas were not castigated, but that people were given respect and space to talk about their ideas. He believes most people are not hardcore supporters of either side and they make their decisions on polling, noting that he knew people who voted for their chosen side and would have been content with the result either way. Indeed, he sought to oppose the notion of two camps as simplistic: there were people in Scotland who voted Yes and Remain, Yes and Leave, No and Leave, and No and Remain. Overall, what matters for Mr Allard is the future. He explained that the future that people want is what really counts, and they should have the democratic and legal chance to vote on it. He acknowledged it would have been easier to become independent in 2014 because back then both Scotland and the UK were fully aligned to and participating in the EU. That is what united the two MEPs: they differ on independence but are fighting to keep the whole UK in the EU.

Schams El Ghoneimi spoke next, mentioning his time at the European Parliament. Part of his role involved assessing what an independent Scotland’s foreign policy would look like. Would it be like Denmark? Would it have opposed the Iraq War, if that happened today? Would it agree to host migrants from Italy and Greece, and then follow through on those commitments like many other states did not? His aim during his interventions on our panel was to look at the nuances of the issue: there were obstacles, but also things that had changed since 2014. For example, Josep Borrell stated that Spain would not block Scotland from joining the EU.

Mr El Ghoneimi added that this is a totally unprecedented situation, and so the EU would likely find a way over the political hurdles. The economic ones may be more complex to deal with. He noted, however, that there are real economic hurdles and that the Scottish independence campaign has work to do to win over those who voted No in 2014. He added that the EU would enjoy a strong message that joining is still desirable – and another net contributor to the budget. Scotland has an inclusive vision of what it means to be Scottish, but its pro-Europeanness is not perfect. Neither Lib Dem or SNP MEPs supported harmonising corporation tax rates or transnational lists. Opposition to the Euro persists, due to Scottish integration in the UK currency union. The most important consideration for Mr El Ghoneimi is where the most pro-European dynamic lies: it would be unlikely for the UK to remain in the EU, but that would be good for the world. If it did not, Scotland could be tempted away in favour of the EU.

Finally, Larissa Brunner rounded off the panel with the EU’s perspective on an independent Scotland. She agreed that Scottish membership would give the EU a PR boost. Furthermore, Scottish participation in the Common Fisheries Policy really matters for the other Member States. The only way to guarantee that it will continue to take part is remaining in the EU. Spain, particularly, does a lot of fishing in Scottish waters. She also agreed it would not veto Scottish independence: it sees the Catalan and Scottish cases as distinct based on legality and cooperation with the central government. It is also politically costly to veto, and Member States are unlikely to expend political capital to do so.

She described Scotland’s potential EU role as being part of the group of small Northern European liberal Member States that do not have the Euro. Such states used to hide behind the UK so they would not have to voice their own concerns but will need to speak up for themselves after Brexit. There is the danger of being marginalised by the Franco-German concentration of power, but these countries will all still have a vote and a Commissioner. She disagreed with commentators who suggest there is a ‘queue’ for membership but noted that Scotland will still have to go through the steps (albeit that this will be a short process.) Ms Brunner suggested EFTA could be a good holding place for it: Scotland being ‘small and humble’ enough to accept being a rule-taker and paying into the EU budget.

Audience questions were varied, discussing everything from the state of the Scottish border after independence to the nature of democracy as we know it. At the CFEP, we aim to facilitate discussion about the future of Europe and help people in the Brussels bubble learn more about the stories they see in the news. Our audience asked some insightful questions about the details of devolution in Scotland and federalism, and our panellists used some terms you might not have come across before.

Scotland has a system of devolved and reserved powers. This gets complex. The Scottish Parliament has an infographic summarising which issues are decided there and which are retained at Westminster. How does this relate to the EU, you might be asking? As Mr El Ghoneimi mentioned, Scottish Government representatives participate in EU meetings in their areas of expertise. As set out in this guide for Scottish Government officials, it is almost assumed that they would want to attend Council Working Parties on environmental, agricultural and fisheries issues. Mrs Ritchie sought to explain Henry VIII powers: the issue with Brexit is that the EU Withdrawal Act allows the UK Government to use these powers to copy EU law into UK law without having to consult Parliament. One question our audience members asked relates to the internal debate about these competencies – once they are regained from the EU, there is a controversy about when they will be devolved to the Scottish government.

Finally, we ended our event by imagining the future. If Scotland became independent, in its first Council Presidency, our panel generally agreed it can and should prioritise leading on climate change. Mr Allard added that he wanted to refocus Scotland and Europe on wellbeing, plugging Nicola Sturgeon’s TED Talk on the topic, and Mrs Ritchie wanted Scotland to take advantage of the EU’s tools to assist its smaller, more remote regions.

We hope you enjoyed our event, and that you learned something about Scotland and its potential futures. Watch this space for our next discussion event in December!