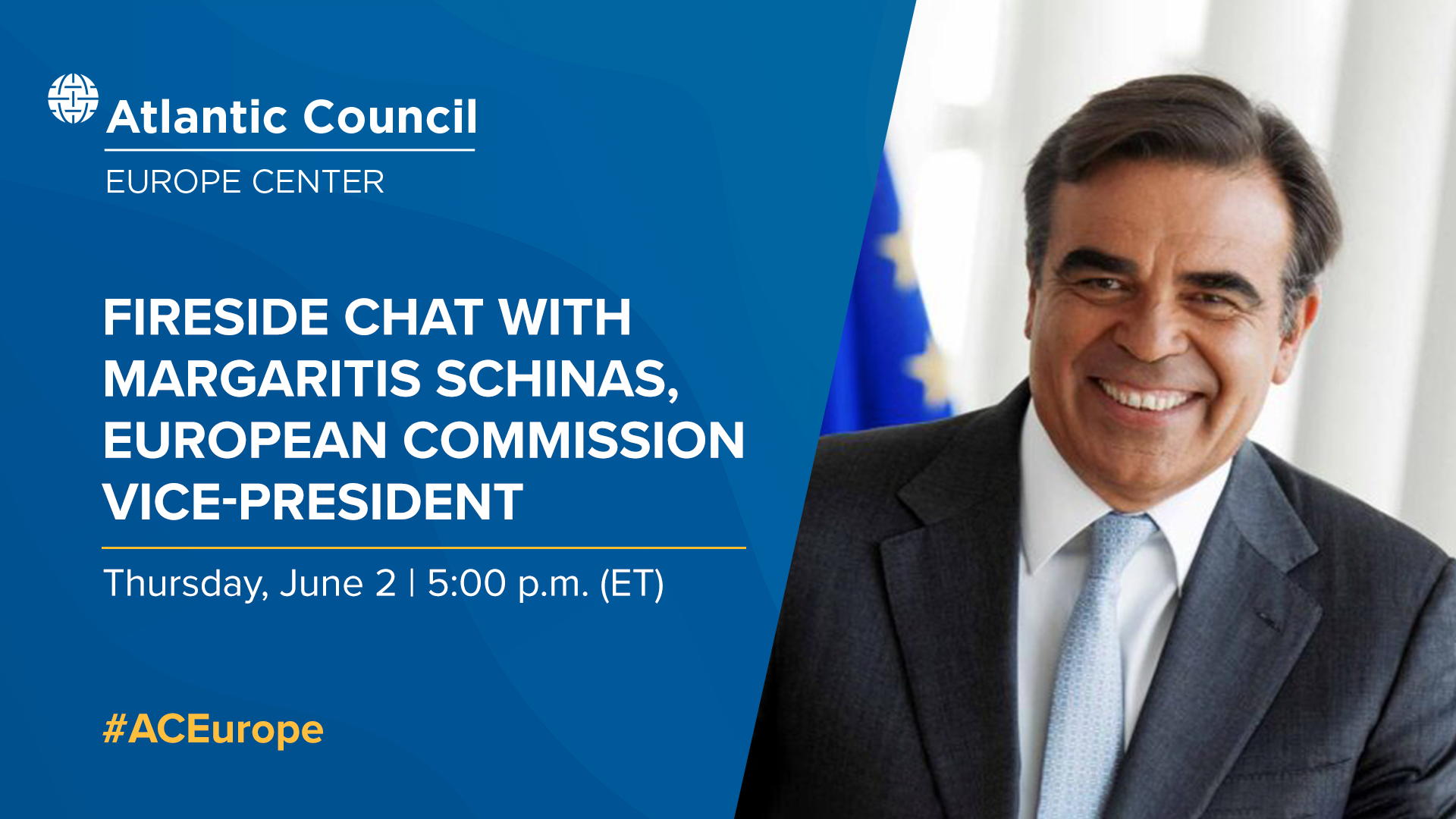 As part of his visit to the United States, the Vice-President of the European Commission, Margaritis Schinas — who has been assigned an important portfolio concerning the ‘European Way of Life’ — participated in a brief, but very interesting and rich conversation at the Atlantic Council.

Firstly, Vice-President Schinas addressed the question as to whether Europe has changed since February 24th — the day that marked the Russian invasion in Ukraine. Notably, how did his portfolio change after this event? The European Union is already focusing on such a plethora of policies that include a Europe which protects — addressing key issues such as migration, security and public health — and a Europe that empowers — facing challenges such as education, culture, youth, sports, skills and mobility. This, such that constitutes our way of life in Europe, can be said to be constantly under threat. Not only has this treaty been renewed because of the return of war to the European continent; but also because of the recent and deeply challenging threats we face as Europeans, such as the COVID-19 pandemic and repeated migration crises.

Has there been a paradigm shift? Mr Schinas is clear on this matter: a green and more digital Europe remains our target as Europeans but we now face a developing crisis buttressed by the current war. This, in turn, can be seen to accelerate all the regulatory efforts being made in order for us to reach these goals faster and sooner. The pandemic represented a herculean challenge and the EU needed to adapt its priorities in order to meet it. This effort led to the biggest vaccination effort ever made in the Union’s history: 5 billion vaccine doses for all Europeans. Furthermore, the recovery fund represented a major step towards the symmetric finance recovery for all — but principally the most affected — EU Member States. Thus, to reiterate, the EU’s core objectives remain. But, by facing the ever developing and mutating challenges along the way — such as the Russian invasion of Ukraine — the EU must itself  continue to quickly adapt and meet the needs of Europeans, as well as its wider community.

Due to the tragic war situation that is taking place in Ukraine, leading to already 6 million Ukrainian citizens fleeing the country towards the European Union, the EU is already working hard to meet this crisis. The EU’s response: a ‘blanket protection’ that allows every Ukrainian refugee to have a legal opportunity to work and travel within the EU. A policy that was adopted quickly and undoubtedly rises to the occasion — since this is the first time that the Directorate provides such a measure; the first time that this protection has ever been activated, with unanimity, by the EU Member States. To explain further, this status for Ukrainian refugees will allow them to gain immediate access to the job market, to Member State’s education and health systems; as well as residence permits that stabilise and legalise their stay. This provides a system that allows refugees — at a time of desperate need and a lack of home — to exercise rights across the EU.

The EU faced migration waves in its past — for example the fateful year of 2015. In  2015, however, smaller yet consistent numbers were arriving on the shores of Europe via the Mediterranean, compared with the approximately 6 million Ukrainians who have arrived in the EU in 2022. Yet the migrants arriving in 2015 proved to be far more controversial across Europe, particularly in some Member States. What differences can be established? There is a war on our doorstep, said Vice-President Schinas. There are 4 EU Member States that share a border with Ukraine, and who have already received 5 million refugees. As Mr Schinas stated, Syria was suffering a slow motion collapse of its society, and this resulted in considerable movements of refugees not crossing, but travelling towards the EU. The system of obligatory relocation was set in motion then — allowing Member States such as Italy and Greece — to accept and then to relocate the hundreds of thousands of refugees among the 27 Member States. Thus, the current ‘blanket system’ for Ukrainian refugees differs from such measures taken in 2015 towards refugees from the Middle East, due to the way that Ukrainian refugees are physically crossing the territory of the EU. However, Mr Schinas stressed that even though both situations are not similar, the principles being upheld within these challenges are the same.

When addressing the question as to whether the Russian invasion of Ukraine is now changing the EU’s future; its common actions; and its policies within the migration portfolio — Mr Schinas pointed to the French Presidency of the Council of the European Union. He referred to the hard work being done on a draft agreement on the New Pact on Migration and Asylum. The Vice-President of the European Commission is confident that the French Presidency will soon bring together an agreement on this issue. He once again points to how a crisis such as this acts as an accelerator for EU agreement on policy — effectively compelling the EU towards a more cohesive system. Mr Schinas revealed that he is sure an agreement will be reached in June, still under the French Presidency, and subsequent conclusions and specificities on the agreement are expected during the Swedish and Spanish Presidencies that follow.

Mr Schinas posits that the EU is invested in doing its best to protect against daily cyber attacks launched against the EU’s infrastructure and several other systems. Not only are these attacks made against the EU’s institutions, but also its enterprises, citizens, EU Member States, and also now: in Ukraine. When addressing this key issue, Mr Schinas firmly said that the era of the EU’s naivety regarding cybersecurity is now over. The mission is clear: measures are being taken by State and non-State actors — with examples such as the changes registered on the EU’s common regulatory framework. Furthermore, proposals have now been tabled to upgrade and reinforce the EU’s cybersecurity defences; aiming to ultimately reach the same level of protection in both digital and physical spheres.

The EU is currently building up its capacities both to defend its own institutions, but also for all Member States. Yet, according to Mr Schinas, two problems are emerging. Firstly, there is a deficit of trust because several Member States do not understand that any attack taken against the EU Institutions also represents an attack on them. Secondly, the EU faces a shortage in the amount of people with sufficient skills in cybersecurity — in regard to EU citizens and those coming from third countries.

The Cooperation Between the EU and the US

Mr Vice-President Schinas gladly pointed out that now both the EU and the US are back on track when looking at their common challenges, such as: cybersecurity; the pandemic response; climate change; the defence of free trade; international crime and the geopolitical challenges coming from Russia, China, and other countries. There is now a very fluid cooperation within the transatlantic relationship, according to Mr Schinas, and this is reinforced today as a result of war returning to Europe. But new initiatives are also emerging – for example, a transatlantic initiative to fight child sexual abuse online with not only the cooperation of the US government, but also American organisations, companies, and citizens. A delicate proposal, since the issues of encrypted data and privacy continue to be difficult considerations to negotiate between the EU and the US. This is also true in regard to other aspects within the scope of data and communications, such as the security and resilience of the current communications network.

Mr Schinas pointed out that the EU took a different approach, which is to propose a kind of toolbox for its Member States. A variety of instruments, tools and criteria, according to which they should select operators. This is particularly salient as we are now approaching new technology in the evolution towards 5G and 6G. Such EU measures proved useful as they are less intrusive and compelling, according to Mr Schinas. This offers a delicately orchestrated relationship between the objectives of the EU Commission and the Member States; as well as a sufficient and convincing toolkit for the States to introduce their public procurement calls. Such a strategy pays off in terms of the regulatory approach, contends Mr Schinas.

Finally, when asked about what keeps him awake at night, the Vice-President of the European Commission stated that his mission is precisely being able to always anticipate what comes next in terms of threats to our European way of life. Mr Schinas is convinced that the main challenge is being able to bring together an EU-wide assistance — fashioned quickly, yet delicately, an agreement between the Commission and the Member States — in order to meet such difficult moments like the refugee crises and the Russian invasion of Ukraine. This is where Europe is at its best, when we as Europeans manage to explore and engage every inch of our  shared abilities and competencies — because this proves to us that we are stronger this way, and that it’s more necessary than ever before.