Backsliding is all too common across Europe, and the EU’s unreliable allyship risks the lives and freedoms of Western Balkan LGBTI activists. 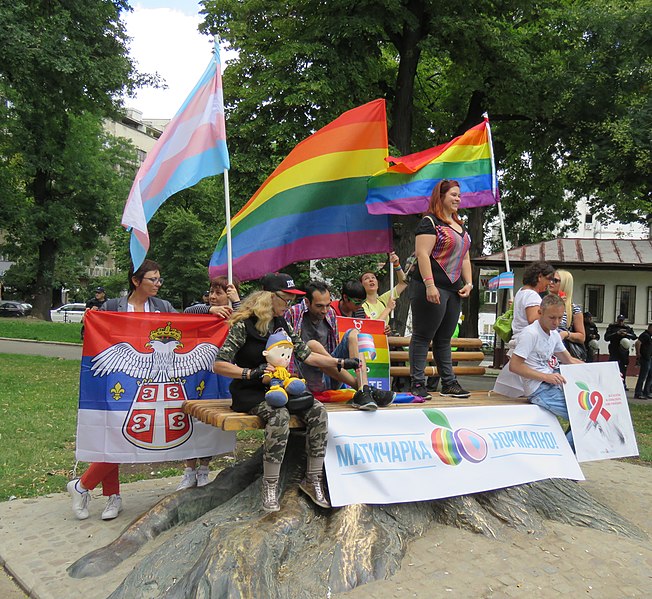 This week, the International Lesbian, Gay, Bisexual, Trans, and Intersex Association Europe (ILGA-Europe) launched its Annual Report 2020 in Brussels. This report goes beyond the EU, covering the human rights situation for LGBTI people in 54 countries across Europe and Central Asia as well as reviewing the work of the EU, UN, Council of Europe and OSCE.

The Commissioner for Equality, Helene Dalli from Malta, attended the event. Malta, the EU’s smallest member state, has built a strong reputation for promoting LGBTI rights at home and in Europe.  Commissioner Dalli made a staunch defence of LGBTI rights and highlighted the need for vigilance against bullying and hate speech, lest it open the door to even worse. In this regard, the Commissioner spoke of LGBTI victims of the Nazis and committed the Commission to take any necessary actions within its Treaty competences in order to stop violence, hatred or discrimination.

The concern for civil society activists is that, in 2020, states still need to be told to respect the fundamental rights of LGBTI people. A case in point is that of Poland. Local politicians have begun classifying their areas as ‘LGBT free zones’, resulting in a strong backlash from civil society activists, the European Parliament, and the European Commission. The Polish Campaign Against Homophobia, also present at the event, worked with the Commissioner to discuss solutions. What mattered most to them was about upholding and defending the rule of law, so that ordinary LGBTI people would be able to make legal challenges if need be. It also called for the EU to develop a Directive on countering hate crime to ensure that LGBTI people across the Union have at least a basic level of protection.

Looking at the Western Balkans demonstrates the EU’s importance for minority rights activists. Under Article 49 TEU, ‘any European State which respects the values referred to in Article 2 and is committed to promoting them may apply to become a member of the Union.’ To join the EU, Western Balkan states need to reform their legal and administrative systems to support LGBTI equality. However, the picture remains mixed in most of the Western Balkan countries, based on the ILGA Annual Report 2020 and the LGBTI Equal Rights Association for Western Balkans and Turkey (ERA) Enlargement Review 2019.

In Albania, NGOs reported discrimination against transgender women in the rental market, as well as 449 hate crimes against LGBT people in 2019. Only 34 were reported to the authorities by victims, and only 1 was acted on. Reporting hate crime to NGOs instead of the authorities is a common issue not only in the Western Balkans but across Europe, out of fear of having their sexualities exposed, or mistrust/mistreatment at the hands of the institutions.

Albania rejected the UN’s and NGOs’ calls to ban ‘sex normalisation’ surgery on intersex children, and anti-LGBTI bullying remains common in schools with no policy in place to tackle it. The media still uses derogatory language, particularly towards transgender people. Pride Marches are respected and supported by government figures and security services, and the Police Academy has worked with NGOs on LGBTI-related training.

However, there is still no provision for legal gender recognition or for same-sex partnerships despite draft laws having been produced. Transgender Albanians remain particularly vulnerable. Public opinion on LGBTI people is still predominantly negative and most LGBTI people feel forced to hide their identities. In 2019, 17 LGBT Albanians sought asylum abroad.

Some LGBTI people from Bosnia and Herzegovina (BiH) also seek asylum abroad. A lesbian couple who were assaulted in Banja Luka (a predominantly Serbian area) ended up leaving the country after being met with police hostility in reporting. Anti-discrimination laws exist but are poorly implemented and few LGBTI-related cases have gone to court. Hate speech intensified around the time of the Pride March, particularly online, and football fans flew the Brunei flag in apparent support for the death penalty for same sex relations with no repercussions. In the predominantly Bosniak and Croatian area, the Sarajevo Pride and the Merlinka International Queer Film Festival went ahead successfully, although the organisers of the former  complained about what they felt to be unreasonably large security bills. Police training on hate crimes in partnership with NGOs also took place, but it was uncertain if it was a one-off or not. Same-sex couples lack legal recognition, and transgender people lack legal gender recognition as well as state-funded healthcare. Intersex children undergo unnecessary ‘sex normalisation’ procedures.

In Kosovo, a Ministry of Justice official was arrested for commenting online that LGBTI people should be beheaded. A new Criminal Code (Jan 2019) bans hate crimes and hate speech on the grounds of sexual orientation and gender identity. Civil society has threatened to take the government to court over the Civil Code failing to include recognition of same-sex partnerships. Some parties publicly supported LGBTI rights in the 2019 elections. Earlier this year Blert Morina, a trans man, was finally able to get his ID changed after 2 years of legal battles, but there remains no official gender recognition process. Pride Week was supported by the government and the opening was held in the President’s building.

North Macedonian trans people have faced difficulties in accessing healthcare. A trans woman was harassed and denied her prescribed hormones at a pharmacy, and no state or professional bodies found discrimination to have taken place. The Minister of Health announced trans healthcare would be covered by public insurance but gave in and withdrew the decision under transphobic public pressure. On a more positive note, a new law on Primary Education made it mandatory for schools to report cases of anti-LGBTI discrimination or face a fine. An anti-discrimination law was also adopted, protecting people from discrimination based on their sexual orientation or gender identity. The first Skopje Pride took place on 29 June and was met by counter-protests and violent attacks against NGO activists. In the latter case, the police did their job in protecting the activists and were also attacked. North Macedonia still lacks a legal framework for gender recognition, and the ECHR ruled accordingly that it is in violation of the right to a private and family life.

Montenegro also has a poor record on trans healthcare and protecting trans people against hate-motivated attacks. Two nurses at the Podgorica Health Centre were considered by the Deputy Ombudsman to have shown transphobic behaviour in mocking a trans woman seeking hormone therapy. The case has been sent to the Commission for Quality Control, but little has been done to secure access to hormone therapy. A Commission for Transgender Health in the Clinical Centre is working on plans to remove medical hurdles to gender transition. Some towns have adopted their own local LGBTI action plans together with NGOs. Among school students, prejudice and myths persist surrounding trans peers, but 62% would support trans students in any case. Public opinion more broadly remains mixed – fewer people believe LGBTI people to be harmful, but only 27% of those surveyed by the Ministry of Human and Minority rights would be ready to instantly support their child if they came out as gay, lesbian or bisexual.

Finally, in Serbia, hate crimes remain a serious issue, and Belgrade’s Pride Information Centre has been vandalised on multiple occasions with little police action. Textbooks no longer describe homosexuality as a disease, and NGOs have provided training for high school teachers and psychologists. Serbia’s female PM is in a same-sex relationship, and recently had a child with her partner who travelled abroad for fertility treatment, but has come under criticism from LGBTI activists for not acting to secure same-sex legal partnerships and family rights – artificial insemination and IVF are banned for those who have had homosexual relations in the last 5 years. Pride of Serbia was supported by the Commissioner for the Protection of Equality, but activists still faced threats after the parade. Belgrade Pride was conducted safely, but its associated Pride Caravan was disrupted in Valjevo and banned in Novi Pazar, a predominantly Muslim town in the Sandzak region. Legal gender recognition is now in place, removing mandatory surgery and sterilisation requirements, but the process still involves medical restrictions that limit trans rights and freedoms.

Overall, the EU and the Western Balkans face similar challenges on LGBTI rights. Progress is happening slowly. It has to be fought for, and the battle is never entirely won. Backsliding is all too commonplace across Europe. The difference is, EU-based activists can rely on the European Union to serve as an ally. The slowdown in the accession process risks depriving Western Balkan activists of the EU’s allyship. This, in the field of LGBTI activism, can and does mean that their very lives and freedoms are at stake.