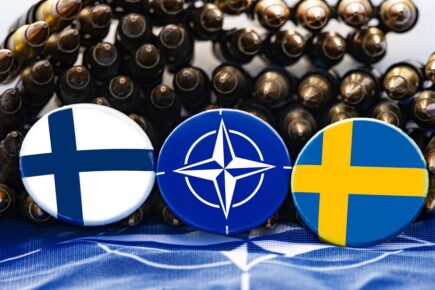 In a historic shift of events, Sweden and Finland bid to apply as members of the North Atlantic Treaty  Organization (NATO), an organisation established as a system of collective security for its members  formed in the aftermath of World War II in 1949.

However, unlike other members, the two Nordic nations before, opted for neutrality and balance  between the west and the east for over two centuries and refrained from joining in. Yet, in a desperate shift of events due to a Russian provocation in Ukraine in February 2022, the two countries have  announced their willingness to join the organization. This one move is being seen as a watershed moment  in the history of European solidarity.

How will the addition of Sweden and Finland create a change in Europe? This article will thus focus on and  analyse the future impact of this move on the European Union, its autonomy, and solidarity.

Solidarity and the EU

According to the EU, the principle of solidarity enshrined in Articles 2 and 3 of the Treaty on the  Functioning of the European Union (TFEU), is explained;

“In its relations with the wider world, the Union shall uphold and promote its values and interests and contribute  to the protection of its citizens. It shall contribute to peace, security, the sustainable development of the Earth,  solidarity and mutual respect among peoples, free and fair trade, eradication of poverty and the protection of  human rights.”

However, the term “solidarity” lacks clarity inits definition of duties. Moreover, to ascertain the common  security and defence policy of the EU, outlined in the 1992 Maastricht treaty that decrees member states  to “commit and deploy resources for military or civilian missions for peace-keeping, conflict prevention, and crisis  management….and influence policies violating international law or human rights, or policies disrespectful of the  rule of law or democratic principles.” have had variable interpretations and were seen as theoretical pieces  of legislation, unlike the other EU budget cases that have garnered a stricter stance.

Against this background, and given the current crises, a lack of dedicated EU military alliance and in the  face of rising security threats, reveals that the foundation of the unions’ solidarity hasn’t had the  opportunity to undergo a stress test and was merely a subject of loyalty. As a result of these external  conditions, the clauses of European solidarity (Article 222 TFEU) and mutual assistance (Article 42 (7)  TEU) have been highlighted, which explicitly imply that no member state is truly neutral once it has joined  the EU and would act collectively in the event of an attack on a member state or in the face of a natural  disaster. The clause also states that states must provide aid and assistance to those in need using all  available means. This shall not prejudice to the security and defence policy of certain Member States in  any specific character; thereof.

Whereas, the mutual assistance by members under the North Atlantic Treaty Organisation makes it  binding to be consistent with commitments and cooperate in collective defence and its implementation in  a similar vein as enshrined under Article 51 of the United Nations Charter.

The formation of EU solidarity clauses and commitments, thus, comes across as in disharmony to each  other and relatively weak compared to the ones under NATO.

The Ripple of Doubt and the Balance of Threat:

While the admission of Sweden and Finland to NATO, as well as their shifting neutrality stance, is cited as  a strategic need and framed as an act of collective pursuit of strong European solidarity, some experts,  however, cast their doubts on their inclusion into NATO, raising the theory of the Balance of Threat, which  claims that states react to threats, not to power. (Bock, H., Why Balacing Fails, 2013, p. 1)

It is believed that, due to the open-endedness of the EU’s solidarity, the union risks losing its balance of  power to the US military, its nuclear strength, and causing destabilisation in Europe. According to famous geopolitical theorist Stephen Walt’s theory of balance of threat (BoT), he argues that “states generally  balance by allying against a perceived threat, and small nations tend to bandwagon more against threatful states  to protect their own national security.” However, states will not balance against those that are rising in power but  those that display offensive intentions. ” (Walt S., The Origins of Alliances, 1987, p. 32). Thus, explaining the  reason for the lack of any serious presence of an anti-American alliance; globally and a modern risk to  Europe’s autonomy with a chance of turning it into a quasi-NATO alliance. Euro-sceptics reiterate that,  while the new non-neutral states have pledged to increase their military spending to bolster Europe’s  defence calibre, it is worthwhile to note that, in the absence of a solidified basis of legislation on solidarity,  the two nations would instead focus on defending their own territories, leverage their own influence over  the Baltics, and exercise dominance over NATO’s policy discussions, thus, threatening the European  Union’s political significance and exacerbating tensions within Europe.

From a legal standpoint, Sweden and Finland joining the league with NATO and its eventual impact on  European solidarity resides on the ambiguity of mutual assistance and solidarity clause of Article 42(7)  TEU, it isn’t flawed to believe that this ambiguity calls for three important eventualities,

While Moscow may have miscalculated how Europe’s solidarity can be put to test where states instead of  going their separate ways chose to balance the threatening behaviour as well as giving the Swedish and  Finnish governments pending speculations on joining NATO; a headway. However, the solidarity clause  between NATO and EU requires a keen legislative re-assessment from the viewpoint of calibre and  commitment to mutual assistance, strategic regional autonomy and economic sovereignty. This  development for Sweden and Finland will shift the pivot of EU’s extent of defence influence and its  relationship with NATO. Thus, determining if non-alignment, neutrality and relationship for Sweden and  Finland along with membership with the Union, is a workable and a long-term concept anymore.

In June, the Center on the United States and Europe at Brookings hosted the 17th annual Raymond Aron Lecture. The session featured Thomas Gomart, director of the French Institute of International Relations in Paris, and Brookings Senior Fellow Fiona Hill, who served...