On the 25th of March (a symbolic day for Greece) we, Centre for European Progression, hosted a debate to discuss about the Greek government’s two months in power from a political and economic point of view. We discussed what kind of deal Syriza could reach with its European partners as well as with its voters back home and how the Greek situation could influence the future of the European integration, especially the eurozone. The panel was composed of the distinguished speakers namely: Mr. Bodo Ellmers (Eurodad), Mr. Constantine Levoyannis (Greek Energy Forum), Mr. Antonios Nestoras (VUB-IES), and Mr. Marco Giuli (European Policy Centre). 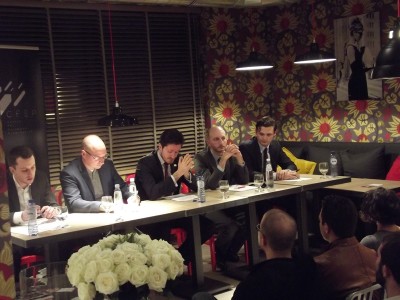 Mr. Ellmers took the floor by referring to the debt sustainability of Greece and its primary surplus. He stated that Greece has primary surplus, and that the new borrowings have only to do with the refinance of the old debt. He also pointed out that Greece needs substantial debt relief to get back on its feet – debt should be reduced by two thirds to about 60% of GDP, to reach the level that is considered sustainable under the Maastricht Treaty. It is somewhat fair that the costs are covered by the whole EU, given the fact that the entire EU profited from the loans, which were mainly used to bailout banks and thus to stabilize the EU financial system in times of crisis. In that respect, he urged EU policy-makers to find effective and innovative ways to recover the money from those who profited most from the bailouts. For Mr. Ellmers Greece is not a unique case. The EU, and actually the whole international community, should work on an effective insolvency regime for sovereigns, because sovereign insolvencies happened often, and they will happen again.

Mr. Levoyannis began his contribution by noting the conditions in Greece in the leading up of the elections result: PASOK’s decline since 2012, New Democracy’s election campaign on fear mongering and Syriza’s unsubstantiated promises that cannot be implemented. According to him, Greece is walking down a path of uncertainty in a completely unprecedented political landscape, since the ‘modern’ Greek era in 1974. On the future aspect, he underlined the two options that Greek government could take: compromise or collision, both spell problems though. Compromise means fragmenting Syriza and threatens the coherence of the government, while collision with international creditors spells catastrophe altogether.

On the domino effect issue of Syriza’s win in Greek snap elections, he foresees that Podemos won’t win but they will make significant gains with a huge impact on Spanish and European politics. Mr. Levoyannis referred to the Greek and European foreign policy by stating that Europe should use Greece’s good relations with Russia to help bring about compromise solutions, and made clear that Russia did not show up to save Greece. By concluding, he said that Greek problem is not just a Greek or a German problem. It requires a domestic solution, strong domestic political will to implement reforms, to cut red tape and bureaucracy and make the country more attractive to investors. He would like to see Greek and European leaders to think strategically and reflect.

Mr. Giuli, started his speech by exploring the political and economic dimension of the potential ‘Grexit’ or ‘Graccident’ which would have severe consequences for Greece, like capital flight or inflation. According to Mr. Giuli playing the Russian card would be an extremely dangerous scenario for Greece and the EU as whole, while a compromise and some kind of debt forgiveness would be the necessary conditions for Greece to restart its economy and determine its substantial debt relief. He also openly stated that the only scenario he would like to see in the future is not a Grexit but an acceptable compromise for all sides.

Mr. Nestoras closed up the debate by giving his opinion on the issue of the “occupation loan” as a contextual element within the wider geopolitical situation and more precisely, SYRIZA’s claim for war reparations and the limits of German (soft) power. Mr. Nestoras stated that the claim for war reparations is linked to a much larger debate concerning worries of excessive German influence and power in the EU institutions and disproportionate control over the future of the EU in general. In this wider context, he wondered if the claim for war reparations could be a symbolic move challenging German leadership in Europe. He said that whatever the case may be, SYRIZA’s win is not in itself endangering Greece’s strategic attachment to Europe. After all, SYRIZA had shrewdly watered down its euroscepticism in the weeks before the elections. Presenting an overview of the political landscape of Greece and the rise of eurosceptisism, Mr. Antonios Nestoras stressed the importance of political and economic unity in Europe which seems to be fading away. He tends to believe that the war reparations claim by Syriza is just a symptom of this fact, not another cause. The current dead-end in European politics is that Berlin has a lot of power and influence, but cannot wield it effectively, either for the benefit of Germany or Europe because, it is lacking the soft power that it needs, the authority to drive the European project forward.  He added by wrapping up, that the claim for war reparations for Syriza serves only to illustrate just how easily German leadership can be challenged, how vulnerable it is to populist rhetoric.