Everyday I Love You Less and Less: Here’s what you missed at our Western Balkans event 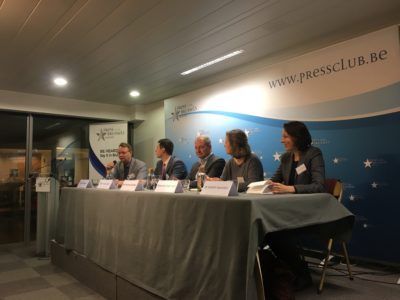 CFEP’s CEO István Szekeres began the event with a brief introduction to the topic.

The first speaker was one of the few MEPs to hold a Serbian passport, Andor Deli MEP (EPP), a dual national of Hungary and Serbia. For him, the EU accession of the Western Balkan states is personal. He knows people who have been waiting two decades to become part of the European Union.  He spent his younger years in Vojvodina, Northern Serbia, which were marked by travel bans, embargoes, and NATO bombing. These experiences make him want integration even more.

For Mr Deli, keeping Serbia on the European path is essential, but the pace of the process is too slow. The October veto has also led to a loss of trust between the EU and the Western Balkan states. However, he sees a chance for a reset and rebuilding of trust with the new Commission. The Western Balkans can serve as a litmus test. If Member States can reach an agreement on that, they may yet be able to tackle thorny policy problems in other areas.

Andreas Schieder MEP (S&D), the Chair of the Delegation to the EU-North Macedonia Joint Parliamentary Committee, spoke next. Before becoming an MEP, he was the Chair of the Austrian-Serbian Parliamentary Delegation. For Mr Schieder, the Balkan states are part of Europe and, by extension, should be part of the EU. He believes that the Balkan states must work with other countries to solve their regional problems. In that regard, North Macedonia fulfilled all the conditions. The promise that Western Balkan countries will be rewarded for solving tricky issues no longer works after Macron’s veto.

The whole European Parliament, possibly bar the Identity and Democracy group, supported accession talks. Mr Schieder met North Macedonian Prime Minister Zoran Zaev on the same day they found out the answer was No. He learned there is a risk of nationalist grievance-based resurgence surrounding the name change.  After the EU’s decision, early elections in North Macedonia will take place at the end of April. At this point, Mr Schieder noted there was a chance to approve the talks in a March summit. For him, as the talks do not begin immediately, it is possible to reform the enlargement process (as Macron suggested) and open accession talks at once.

Alexandra Stiglmayer, of the European Stability Initiative think tank, was the third speaker. She presented a variety of statistics on the Western Balkans and discussed several problems with the accession process. The first was its lengthy nature, which results in painful reforms for a distant future benefit. Another problem relates to the EU institutions. There are over 70 veto possibilities. Member States have to approve progress at each stage (application, official candidacy, negotiations). These vetoes often have little to do with the country’s actions, but with domestic views on enlargement.

She also noted that even if certain countries are ahead in the accession process, it doesn’t necessarily reflect their readiness to join the EU. North Macedonia, which has not yet begun negotiations, is ahead of Serbia in Commission assessments. Secondly, Commission reports are also vague and lack concrete details which could guide foreign investors or NGOs. Thirdly, she added that these countries lag far behind the EU average and do not get much help to catch up.

She noted the Commission often argues that the Western Balkans do not have the absorption capacity to spend their allocated EU funding. Romania and Slovenia do not spend their entire allocation either, and yet they have seen dramatic improvement. Committed governments, such as North Macedonia, would make use of the money. The monitoring mechanism also needs reforms to include merit-based and detailed key requirements. These would aid comparison between states and remove the potential for political vetoes. Her third, and final, proposal involves pre-accession single market access. This would involve the implementation of 60-70% of the acquis. It could also motivate politicians who otherwise think in electoral cycles.

Dr Isabelle Ioannides, a Senior Associate Researcher at the Vrije Universiteit Brussel (VUB) and a Europe’s Futures Fellow at the Institute for Human Sciences (IWM) in Vienna, was the final speaker. She was cautiously optimistic about the chances of enlargement to the Western Balkans. It was not just any Member State that blocked the talks: it was France, which holds big sway at EU level and whose preferences cannot be overlooked. However, she noted that experts have had long-term concerns about enlargement policy and that there is a case for reform. These include ineffective development conditionality, double standards, and poor performance in Common Security and Defence Policy missions.

The risk, according to Dr Ioannides, is coupling enlargement reform to internal reforms. This could potentially push enlargement off the agenda. Shared responsibility is needed: willingness from below and pressure from above. She remained optimistic as a result of the continued pro-European and pro-enlargement majority in the European Union, and the re-election of MEPs with experience on the Western Balkans. The Commission should be given a chance, although she remains concerned not just about France, but other Member States which have questioned Albania’s readiness (such as Greece). Others still are happy to hide behind France’s veto. In light of the Commission resulting from backroom manoeuvres, she wondered if it would be able to stand up to the Member States on enlargement. For Dr Ioannides, enlargement was never a romance. It is a long-term process of hard work and sacrifice. Western Balkan countries need to understand it is a road of sacrifice, and the EU needs to be more understanding of the sacrifices made.

Audience questions touched on Macron’s non-paper ‘Reforming the European Union accession process’, the role of non-EU states in the region, Turkey, Ukraine, and, finally, the future of the region in 2030. Dr Ioannides did not think any of the Western Balkan countries would be members by that date. Ms Stiglmayer was more optimistic, perhaps seeing North Macedonia and Montenegro as members by 2030. For Mr Schieder, 2040 was a more realistic time schedule. By contrast, Mr Deli felt something had to happen by 2030 for the enlargement policy to remain workable.

The region’s future may be uncertain, but what is certain is that the EU-Western Balkans debates are here to stay – whether the Member States like it or not.