Turbulence in the Eastern Mediterranean

Turbulence in the Eastern Mediterranean: Can sanctions work? 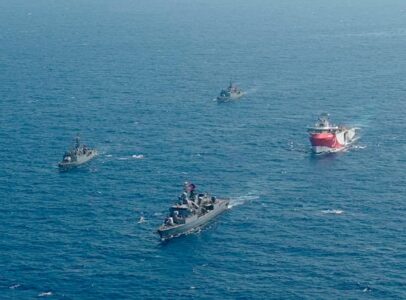 The turbulence in the Eastern Mediterranean and the strained relationship between Greece and Turkey have captured the headlines recently. The tension built up in February, when Turkey warned  that they would open the country’s borders with Greece so that millions of  asylum seekers can head to Europe. And they did it. This was followed by rivalry at sea:  Turkey started gas explorations near Cyprus and expressed plans to extend its maritime territory to drill for gas also near Crete, not respecting international law. The Turkish explorations stopped for a while, opening a window of opportunity for discussions between the countries involved, but Turkey recently resumed their actions. Greece is said to be currently planning various diplomatic initiatives such as, among others, filing complaints with the International Civil Aviation Organization (ICAO) and the International Maritime Organization (IMO) over “Turkey’s unauthorized decision to extend its search-and-rescue area in zones that overlap Greece’s area of responsibility”.

The European Union has expressed its support to Greece and Cyprus in their quest for respect to international law and peace. President of the EU Council Charles Michel has reiterated the European solidarity with the two countries. German Chancellor Merkel and French President Macron also said that they would not accept attacks on EU member states’ sovereignty. Both Greece and Turkey consulted with the EU institutions and Germany, but -still- not with each other.

At the recent EU Council Meetings (1-2 and 15-16 October 2020), the topic was high on the agenda. With its two Council Conclusions, the EU strongly condemned Turkey’s actions in the Eastern Mediterranean, reiterated its full solidarity with Greece and Cyprus calling for respect to their sovereign rights, and, provided that there are efforts to stop illegal activities vis-à-vis the Member States concerned, agreed to launch a positive EU-Turkey agenda. As for the recent opening of the Varosha beach in Cyprus, the Council Conclusions urged Turkey to respect the UN Security Council Resolutions 550 and 789, and called on Turkey to “reverse these actions and work for the easing of tensions in a consistent and sustained manner”.

But maybe most importantly, the Conclusions read that ‘in case of renewed unilateral actions or provocations in breach of international law, the EU will use all the instruments and the options at its disposal, including in accordance with Article 29 TFEU and Article 215 TFEU, in order to defend its interests and those of its Member States’. These ‘instruments’ and ‘options’ are nothing else that restrictive measures and sanctions in an effort to restore respect to international law. But can these actually work? And how?

Sanctioning, as the EU sees it, is an essential tool for the promotion of peace, democracy, human rights and the rule of law. Until the 1980s, the European Communities (the predecessor of today’s European Union) did not adopt its own sanctions — such decisions were made on the national level to implement United Nations Security Council (UNSC) sanctions. Recently, however,  economic sanctions have become a key element of the EU Foreign and Security Policy (CFSP), as it has been reflected in the gradual increase in the number of countries under EU sanctions. On the UN level, sanctions are defined as ‘measures not involving the use of arm force.. employed to give effect to [UNSC] decisions’. The European law does not explicitly define EU sanctions other than that their purpose is to implement the decisions of the Council of the EU.

What types of sanctions exist?

Asset freezes are the most widely used types of sanctions, and they are usually combined with visa bans. Another type is the arms embargoes, and banning flight and shipping access to European airspace and ports. Financial measures such as bans on bank transfers and investments are also commonly used. Trade measures limit export and import between the EU and the sanctioned state.

The EU can impose other sanctions-like measures, which play a similar role. Bilateral negotiations can be put on hold or be suspended, and development aid and loans can be cut off. In case there is no human rights compliance by a developing country and the dialogue is not sufficient to restore basic principles, the EU can also withdraw trade privileges that a country enjoyed. Last but not least, the EU can also ban fisheries imports from countries with serious problems with illegal fishing (as seen with the cases of Cambodia, Grenadines, St Vincent and the Comoros).

According to the Council of the EU, the EU sanctions do not aim to cause economic hardness but rather ‘to bring about a change in policy or activity by the target country’. Sanctions have many times failed; for instance, the long-lasting EU and UN sanctions against Sudan and South Sudan have not stopped human rights abuses,  and EU and US sanctions against Syria have not stopped the Assad regime’s brutality either. Studies have shown that fewer than one quarter of UN sanctions achieve their aims- financial measures such as the suspension of development aid are seen as more effective.

The sanctions database of the Peterson Institute for International Economics maintains that sanctions fail to achieve their policy goals in about two out of three cases. However, these failures do not necessarily mean that sanctions policies are ineffective. According to a study by the EU Institute for Security Studies ‘the effectiveness of sanctions depends on the alternative policy instruments available to policy practitioners.’ Some basic conditions for success (such as economic and diplomatic exchanges and some measures agreed before the sanctions’ enactment) need to be also met. Adding to that, sanctions should belong to an integrated approach to international peace and security and, as they have most of the times an economic dimension, their damage needs to be carefully examined and well understood ex ante.

As sanctions are employed to bring change, there are also some other preconditions for them to succeed. For instance, the level of trade between the imposer and the target country needs to be high, otherwise the sanctions will not have an impact. The target will be more affected on the basis of their political system: if democratic, sanctions are more likely to succeed as opposed to an authoritarian regime as this might ‘have the capacity to distribute the losses (and gains) from sanctions in ways that penalize their opponents and reward their supporters, thus often strengthening authoritarian rule in the process, as observed in Iraq during the 1990s.’ Moreover, sanctions may strengthen popular support for the receiver’s regime, especially if the regime of the receiver is characterized by a strong commitment to political, economic or religious ideologies.

Imposing a single type of sanctions can prove unsuccessful in reaching the goals set- rather, it is the simultaneous application of at least three different types of sanctions that will have a real impact (be it coercion, constraint or signaling). Strong multilateral political commitment is also needed, as ‘the more multilateral the sanctions are, the fewer the options for sanctions evasion or trade diversion by the target’, a report by the European Union Institute for Security Studies shows. In any case, sanctions multilaterally supported have more legitimacy.

Last but not least, for sanctions to succeed, the texts need to be unambiguous: the goals have to be well articulated and defined so that there is no room for manoeuvres, and the situation post the sanctions application needs to be actively monitored. Moreover, the conditions under which sanctions are lifted need to be clear from the beginning of their application, and a broad consultation with third party stakeholders can also add value, along with a close coordination between EU institutions and EU Member States.

Regarding the particular case, the European Union has shown its support to Greece and Cyprus, as the rights and sovereignty of two EU Member States need to be effectively protected. For now, it was satisfactory to see that the EU showed its solidarity to EU Member States at risk of possible conflicts and of violation of sovereign rights- upholding the rule of law and democracy as its beacons. Sanctions are still being avoided, but in case we face another dead-end soon, they will inevitably be introduced.