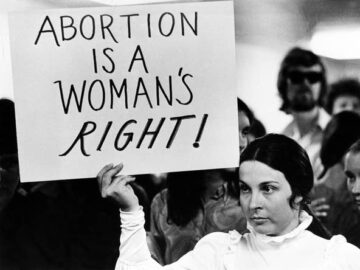 The overturn of Roe v. Wade was met by the international community with dissent and condemnation, including European leaders. But can Europe really declare itself safe from such major overturns? The U.S. Supreme Court decision is nothing else but the triumphal result of an anti-gender movement which began decades ago, made of astroturfing and off-book funding that aims at advancing anti-gender ideals using all kinds of means.

On 24 June, the U.S. Supreme Court overturned the Roe vs. Wade decision in what could be seen as one of the most dramatic moments in the history of women’s rights after the Second World War, taking the country back in time to the 70s.

1970 was the year when a 25-year-old woman, Norma McCorvey, using the name Jane Roe, challenged Texas’ laws which criminalised abortion by commencing legal action against Henry Wade, the district attorney of Dallas county, Texas, where Roe resided . In January 1973, the U.S. Supreme Court put an end to the case ruling that “unduly restrictive state regulation of abortion is unconstitutional” and that “a set of Texas statutes criminalizing abortion in most instances violated a woman’s constitutional right of privacy”. The justices of the court used as justification the  liberty guarantee of the Fourteenth Amendment of the U.S. Constitution (1).

To understand the importance of this decision, it is worth mentioning what abortion laws looked like prior to 1973. Before Roe v. Wade, getting an abortion or attempting one was a crime in 30 out of 50 states in the U.S. The remaining 20 were divided between the legal right to an abortion (4), and the lawfulness of abortion under limited circumstances (16) (2). Row v. Wade legalised abortion within the first-trimester and also put in place some protections to terminations later in the pregnancy. Most importantly, abortion went from being banned by all but only a few states, to being a legal right in all 50. In turn, this triggered the regrouping of movements which opposed the ruling (3).

In 2022, with the overturn of this decision, 13 states already have laws that ban abortion and can now enforce them without any constitutional obstacle. Furthermore, 6 states have almost total bans that prohibit abortion after 6 weeks, which is most often too short of a time period for women to even know they are pregnant. The result is that tens of millions of women could see their right to have a safe and legal abortion disappear (2).

Politicians from America and all over the world condemned the overturn, including U.S. President Joe Biden, who on Twitter defined the fact as expressly “taking away a Constitutional right from the American people that it had already recognized”. Other European leaders joined him in deploring the decision. U.K. Prime Minister Boris Johnson defined it as a “step backwards” with “massive impacts in people’s thinking around the world”. French President Emmanuel Macron talked about abortion as a “fundamental right for all women”, whereas Belgium’s Alexander De Croo condemned the negative signal that this decision sends to the world, reaffirming Belgium’s determination to “work with other countries to advance #SRHR (ndr Sexual and Reproductive Human Rights) everywhere” (4).

However, Europe is arguably not in the position to lecture America. The limit on abortion in Britain is just 9 weeks, which is largely below the first trimester. In France, the limit is 16 weeks (5).

What could be the consequences of Roe v. Wade for women’s rights in Europe? To answer this question, it should be mentioned that the overturn of Roe v. Wade did not happen overnight, as many news outlets like to frame it these days. Donald Trump’s legacy is partly responsible, as he nominated three of the justices in the majority of the Roe v. Wade overturn ruling: Neil Gorsuch, Brett Kavanaugh, and Amy Coney Barrett. Trump described himself as “honored to have appointed justices who overturned Roe v. Wade” (6).

However, this decision is also the result of a campaign started decades ago by Christian conservative groups, right wing political parties, and pro-life movements across the U.S., which did not limit their influence to the U.S. only (2). Over the second half of the 20th century, evangelical activists in the U.S turned opposition to abortion into a basic conservative position, making it the “pièce de resistance” for Republican candidates. They went as far as targeting law schools, when in 1982 they founded the Federalist Society to promote conservative interpretations of the American Constitution. The Supreme Court decision is their biggest win in a half-century (7). Anti-abortion ideals are not new in Europe either. The Catholic Church’s stance against abortion is secular, whereas Orthodox and conservative Protestant groups adopt similar positions.

The European continent has not been able to replicate such a victory so far, turning it into a great opportunity for U.S Catholic groups to fuel the anti-abortion trend through funding. This brings us to the “behind the scenes” of which we should mostly worry about (7). A report published by the European Parliamentary Forum for Sexual and Reproductive rights published in 2021 revealed how the anti-gender mobilisation is supported by a whole “under the tip of the iceberg” off-book funding flow (8). U.S. Christian Right NGOs and think tanks, funded in turn by foundations that are created by U.S. top billionaires, cross the Atlantic to line the pockets of European anti-abortion actors. Between 2009 and 2018, total funding reached USD 81.3 million.

To cite one amongst many, the American Center for Law and Justice (ACLJ) channels funding to her Strasbourg-based sister organisation, the European Center for Law and Justice (ECLJ), to the tune of USD 1.2 million every year. The ECJL director Gregor Puppinick commented the overturn as something “very positive”, which “will be looked at by other judges” (7). The ECJL conducts advocacy and campaigns promoting anti-gender ideals and played a crucial role in well known anti-gender and anti-LGBTQI initiatives such as the La Manif pour Tous homophobic demonstration in Paris in 2013 (8). Behind the funds, mega donors are the invisible face of this movement. The DeVos family has created various foundations wishing to contribute to a conservative infrastructure advancing a “Christian cultural and social agenda” and they are well known for aiming to privatise education, undermine unions, and for their stance against LGBTQI equality. Tellingly, Betsy DeVos was appointed State Secretary for Education during the Trump administration.

The funding flow does not only come from the U.S. Examples of similar European foundations include the Italian Novae Terrae Foundation. Between 2012 and 2015, Nova Terrae received EUR 2.39 million through a Russo-Azerbaijani laundromat in exchange for false reports on the Azerbaijan record on human rights within the Council of Europe, where Novae Terrae founder Luca Volontè was sitting.

The winning elements of this system are pervasiveness and granularity. The strategy is to reach an audience that is as broad as possible and through various means that go beyond NGOs and political movements’ funding. In Spain, the organisation Hazte Oir (Make Yourself Heard) established by Ignacio Arsuaga created offshoots such as Actuall, a far-right news portal connecting religious extremist actors and right-wing media, and CitizenGO, a conservative social mobilisation platform (8).

It is well known that anti-gender ideals are now populating electoral campaigns as well. Among the next key European electoral appointments, the Italian elections on 25 September foresee the far-right Brothers of Italy led by Giorgia Meloni as the favourite in the polls (9). In the event of Giorgia Meloni leading the next Italian government, a woman in chief at Palazzo Chigi seems to be the only ‘progressive’ element we should expect. The party’s programme for the 2018 election prioritised the defence of the “natural family”, as well as the “fight against gender ideals”. On abortion, Brothers of Italy has ensured they will not abolish the Italian law on abortion (Law 194 of 1978 ndr), but Giorgia Meloni was seen passionately advocating for a “yes to life and culture and no to the death and abyss” during a Spanish far-right party Vox demonstration (10). Furthermore, Giorgia Meloni’s party allegedly receives funding from the U.S. far right (11) and she maintains a working relationship with Steve Bannon, former White House strategist during the Trump administration and later found involved in the 2021 Capitol Hill demonstrations.

Such trends create a complex and pervasive web that is strongly willing to advance anti-choice and anti-gender ideals systemically. The overturning of Roe v. Wade could possibly set a dangerous precedent and energise similar European movements, actions, and political trajectories which will cause a backwards slide in the dignity and human rights enjoyed by all Europeans.