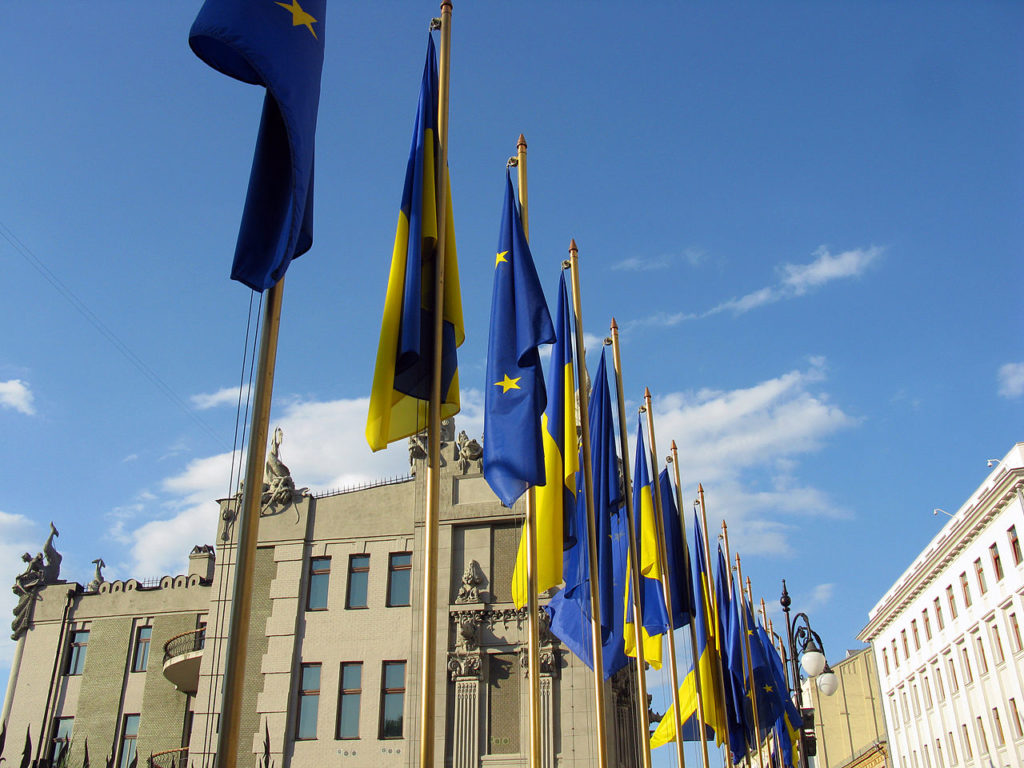 “We don’t want to risk war, but Putin is already waging one. That makes us look weak.” This was one senior European official’s assessment of the EU’s response to the conflict between Ukraine and Russia in Politico two weeks ago. And indeed, the EU must step up to de-escalate the situation in the Sea of Azov and eastern Ukraine.

On 25 November, Russian military vessels captured two Ukrainian gunships and a tugboat, the Berdyansk, Nikipol and Yani Kapu, respectively, in the Kerch strait between the Taman peninsula of Russia and the Russian illegally occupied Crimea. To summarise the day’s events, the already bubbling tensions on the Sea of Azov turned into a confrontation between the two sides, including the larger Russian ships ramming into the Ukrainian vessels, as the Russian authorities tried to obstruct the passage of the Ukrainians through the strait. In the evening, the Russians opened fire, injuring three crewmen, and boarded the boats on international waters. A combined crew of 23 Ukrainian sailors were captured and remain detained in Lefortovo Prison in eastern Moscow, waiting for a trial in a court-ordered pretrial custody. According to Aider Azamatov, the lawyer for one of the crewmen, the sailors were charged with illegal border crossing and could face up to six years in prison.

The Russian justification for the incident has revolved around the claim that the Ukrainian vessels violated the integrity of Russian territorial waters in their attempt to pass through the strait. This, however, is only the case if one recognises Crimea as legitimate Russian territory, which majority of the UN members have refused to do. Yet, according to Ukrainian officials, the sailors were captured as they were returning to Odesa following the failed attempt to reach the Sea of Azov, access to which has been strictly controlled by Russia ever since its takeover of the Crimean peninsula and the city of Sevastopol in 2014. Ukraine, on the other hand, has referred to the 2003 bilateral agreement, which declares the Sea of Azov as shared waters of the two countries, to justify its freedom of navigation in the area.

Russia’s narrative eagerly points to Ukraine’s upcoming March presidential elections as the underlying political motivation for the clash and the Kremlin has tried to explain rising tensions on the Sea of Azov with president Petro Poroshenko’s ambitions to be re-elected on a national security platform. But in Kyiv, acts of aggression such as this are often seen as Russian attempts to influence Ukrainian domestic politics. For example, it has been suggested that Moscow could “negotiate” the freeing of the sailors with a pro-Russian presidential candidate in order to enhance their visibility and credentials ahead of the election. Russian president Vladimir Putin even announced that with Ukraine’s current political leadership it would be complicated to negotiate peace in eastern Ukraine. But as the Ukrainian political landscape and public opinion remain overwhelmingly sceptical of Russia’s influence, there is a high risk that such a publicity stunt might backfire.

Moscow’s intentions may, however, have more to do with increasing economic pressure on Ukraine than petty politics. As Ukraine has become essentially immune to Russian domestic measures due to the severity of existing Russian sanctions on trade with Ukraine, the Kremlin has had to look elsewhere. For instance, the economic pressure logic has been seen in the Nord Stream 2 pipeline project, which would allow Russia to circumvent Ukrainian transit fees on gas sold to Europe. In the case of the Azov sea, the Kerch strait is its only point of access and a lifeline for trade to and from the ports of Mariupol and Berdyansk in eastern Ukraine. Blocking this access would have highly detrimental long-term consequences to the economy of the whole region in part due to the insufficient infrastructure and transport links between western Ukrainian ports and the eastern regions, which could not currently replace this access.

For the EU, the situation is a security headache everyone hoped would not materialise. In fact, six days before the incident on 25 November, European foreign ministers actually met in the Council and discussed, among other things, the rising tensions on the Sea of Azov (resulting in not much). A day after the incident, on the other hand, European foreign ministries started to churn out statements featuring various levels of “concern” over the situation, with the UK’s foreign secretary Jeremy Hunt taking this a step further and “utterly condemning” Russia’s actions. But the fact remains that many European leaders – with only a few exceptions –have shown remarkable weakness in their response to Russian efforts to claim the Sea of Azov as inviolate Russian territory.

Although both Ukraine and Russia seem unwilling to escalate the situation further, the opening of the “third front line” on sea would in all likelihood worsen the situation on land, where the situation has remained largely immobile since 2015 (despite around 400,000 ceasefire violations in 2017 alone). To de-escalate the situation, the EU should call for an Organization for Security and Cooperation in Europe (OSCE) monitoring mission on the Sea of Azov, as international presence on the sea would likely lower the risk of further escalation. The OSCE already has an ongoing land border monitoring mission on the “first front line” in the Donbas region. And if Russia is confident in its version of the story, then it should accept the independent international monitoring mission. Furthermore, the EU must continue to show Russia that its actions have consequences in the form of economic sanctions, which have so far been effective in restricting the access of state-backed Russian companies to Western markets and capital. To this end, the member states should consider closing EU ports to ships from Russian ports on the Azov sea. In addition, the EU needs to better utilise its anti-fraud and anti-money laundering measures to deal with Russian capital in Europe gained through corruption. A welcomed step towards further sanctions is the Dutch-initiated EU Global Magnitsky Act, which is currently being finalised (after being originally proposed by the European Parliament in 2014) and aims primarily to protect human rights by imposing targeted sanctions on individuals violating those rights and engaging in corruption.

Moreover, the EU has a crucial role to play in providing economic support to eastern Ukraine. Since 2014, the EU has, together with the United States, committed €4 billion in financial assistance to Ukraine. On top of this, the EU has provided significant sums of humanitarian aid to displaced persons and those in the conflict areas, as well as technical assistance to tackle corruption in the country. To do more, the EU should look into reducing trade barriers further between itself and Ukraine – mainly quotas on competitive Ukrainian exports – and investing more in the aforementioned infrastructure and transport links between eastern and western Ukraine to the benefit of the country’s economy.

Europe needs a coordinated and consistent response that sets consequences to Russia for acts of aggression and assists the economy of Ukraine in order to alleviate the situation in the eastern regions of the country and the Sea of Azov. And in the context of European foreign policy, of course, this plea is most strongly intended to Paris and Berlin.